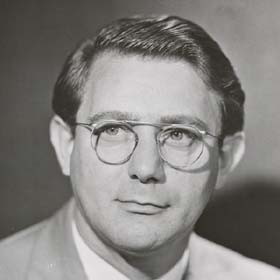 Abe Silverstein was a leading figure in twentieth-century aerospace engineering and director of the Lewis Research Center (now the Glenn Research Center) from 1961 to 1969. Silverstein earned a BS in mechanical engineering (1929) and an ME (1934) from Rose Polytechnic Institute, and later received an honorary doctorate from Case Institute of Technology. He began his career with NASA's predecessor, NACA (the National Advisory Committee for Aeronautics), at its Langley Research Center in 1929. In 1943, he transferred to Lewis, where he carried out pioneering research on large-scale ramjet engines. After World War II, Silverstein conceived, designed, and built the first supersonic propulsion wind tunnel in the United States. The 10-foot by 10-foot Supersonic Wind Tunnel is still operational at Glenn. In 1958, Silverstein moved to NACA Headquarters in Washington, DC, where he helped create and then direct efforts leading to the Mercury spaceflights. He later named and laid the groundwork for the Apollo missions that put the first man on the Moon. When he returned to Cleveland to become Director of NASA Lewis, Silverstein was a driving force behind the creation of the Centaur launch vehicle, particularly the hydrogen-oxygen upper stage propulsion system. He retired from NASA in 1970 to take a position with Republic Steel. In 1997, he was awarded the Guggenheim Medal for his "technical contributions and visionary leadership in advancing technology of aircraft and propulsion performance, and foresight in establishing the Mercury and Gemini manned space flight activities."