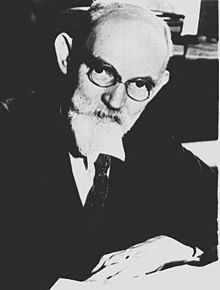 Willem de Sitter was a Dutch astronomer and mathematician who helped Einstein's general theory of relativity become widely known and who proposed a modification of it to allow for a gradual expansion of the Universe.

De Sitter worked extensively on the motions of the satellites of Jupiter, determining their masses and orbits from decades of observations. He redetermined the fundamental constants of astronomy and determined the variation of the rotation of the Earth. He also performed statistical studies of the distribution and motions of stars, but today he is best known for his contributions to cosmology. His 1917 solution to Einstein's field equations showed that a near-empty universe would expand. Later, he co-authored a paper with Einstein (1932) in which they argued that there might be large amounts of matter which do not emit light, now commonly referred to as dark matter.

The de Sitter model is a model of the universe that contains no matter, but only a positive cosmological constant. It expands at an exponential rate forever, with no initial Big Bang, nor with a final Big Crunch.