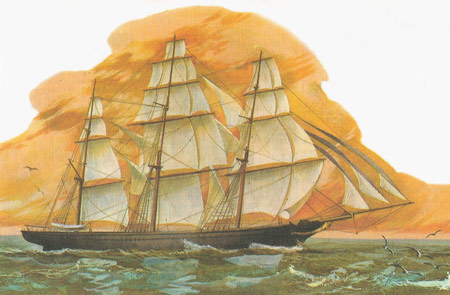 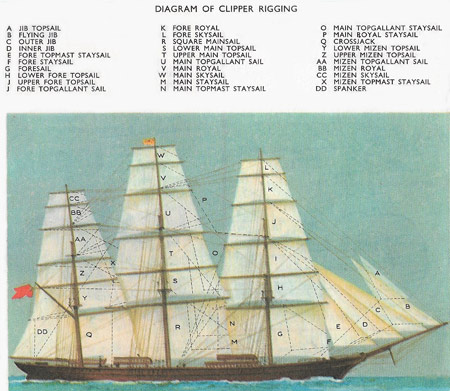 A ship is a vessel for conveying passengers and freight by water. Modern ocean-going ships developed from early sailing ships, such as the carracks (Mediterranean merchant ships) of the thirteenth century and larger early ships called galleons. Fighting ships of the seventeenth and eighteenthth centuries included frigates of various designs; later models had several rows of guns. Sailing freighters led to the development of the great clippers of the late 19th century, some of which had iron hulls.

The great days of the clipper ship came after 1850, when the UK parliament repealed the Navigation Acts. This meant that foreign ships were able to compete with British ships in collecting from China the new season's crop of tea. The stately British ships were built for safety at sea on long voyages; the Americans entered the tea trade in competition with them, using fast ships which brought home the new tea in record time, and so secured the highest prices on the London market.

British ship owners replied to this challenge by building special ships designed to sail even faster than the American clippers. As a result, an exciting series of races developed which were followed by the public with great interest.

Tea clippers were quite small, some only 700 tons, and were given fine lines so that they could make a fast passage, under a press of sail, in the light airs expected in the China Sea. They were not really suited for other trades. But the term 'clipper' came to be used for fast sailing ships in general, and after 1870, when the Suez Canal had been opened and it was no longer economic to export tea from China in sailing ships, fast vessels on passage to Australia, or anywhere else in the world, were advertised as clippers. Men spoke of 'clipper' brigs or schooners, and the word came to mean nothing more than fast sailing. Sailing required large ship's companies (crews) to handle the heavy masts and spars, and the large acreage of bellying canvas that could drive a tea clipper through the water at 10, 12, or even 18 knots (nautical miles per hour). Growing competition with steam ships had to economise. Sailing ships were still thought to be safer and more reliable, although unable to run on a timetable. Crews became smaller, and the sail area was reorganized into smaller units (the topsails and topgallant sails were cut into two), and more winches eased the labor. Thus even the very biggest sailing ships were easy to handle and lasted well into the twentieth century.

The first step in building land vehicles powered by steam engines was accompanied by attempts to drive ships by steam engines. It is difficult to say who first did this as many ship models were doubtless built first, but the Frenchman Jacques Perier, the Americans James Rumsey and John Fitch, and the Scotsmen Patrick Miller a banker and William Symington were all concerned with practical experiments on full-sized ships. The second engine that Symington built is still preserved in the Science Museum of London.

The next advanced probably came from America where Col. John Stevens and Robert Fulton both built vessels; the former had tried for years to use a screw propeller for propulsion, but in his vessel, which was the first steamship to travel on the open sea, he used paddle wheels. The story of Fulton's steamship journey on the Seine in 1803 is interesting. This ship would have looked like an ordinary sailing vessel had it not been for two paddle wheels, one on each side of the hull, and for a long black funnel appearing among the sails. The ship was equipped with a steam engine which had been fitted in a very ingenious way: The pistons had been connected by a system of chains to an axle, at each end of which was a paddle-wheel. The alternating movement of the pistons gave a continuous motion to the paddle wheels and consequently the ship was driven forward.

Fulton's steamship was the talk of Paris; everybody was curious to see whether it had the power to move against the current of the Seine. Many people believed that such a thing could not happen, and they therefore expected a failure.

The morning of 9 August 1803, was fixed for the trials, and thousands of Parisians crowded the banks of the Seine. Everyone had their eyes fixed on the ship and Fulton was very worried that his experiment might not succeed. He thought of the booing crowds if he failed. But at last water started to churn under the paddle wheels, black smoke came out of the funnel, and the ship started on its journey up the Seine. Robert Fulton sighed with relief, while an enthusiastic French crowd cheered him with joy. The American, however, was much less concerned with the applause of the crowd than with whether he would receive the acknowledgment of navel experts, admirals and shipbuilders. But no acknowledgment came, and his experiment seemed only to have served to entertain the Parisian crowds.

After trying unsuccessfully to introduce his invention into England, Fulton left for America and started all over again. In the summer of 1807 the steamship 'Clermont', which was 131 ft long and 18 ft wide, was ready for its final trials and to prove itself in public. Fulton planned for his ship to make the journey from New York to Albany, a distance of about 173 mi.

The trials were a complete success and the 'Clermont' arrived in Albany after 32 hours steaming up stream. It was a very long voyage for this early steamship to accomplish. It was the start of steamships being used as a regular means of transport, and the success of steam navigation was thus established. In New York a distinguished American ended one of his speeches by saying: 'We have witnessed one of the greatest triumphs of modern engineering technique. Soon all our rivers will be sailed upon by ships like the 'Clermont', and the day will come when big steamships will cross even the great Oceans'.

This actually happened in 1819 when the steamship 'Savannah' of 250 tons, left Georgia and crossed the Atlantic Ocean. The voyage lasted 29 days and 11 hours.

The steam engine was gradually introduced into the Royal Navy and in 1823 HMS Lightning was built at Deptford in London with engines of 100 hp. The next year she was the first British warship driven by steam to take part in naval warfare- less than 20 years after the Battle of Trafalgar.

Another interesting British development was the first voyage by the steamship 'Enterprise' to India; she left Falmouth on Aug 16, 1825, and reached Calcutta on December 7, 1825, going by way of the Cape of Good Hope.

Although the Atlantic Ocean had been crossed by steamships many times since the 'Savannah' in 1819, the first practical regular steamship service across the Atlantic was by the 'Great Western' in 1835 when the journey from Bristol to New York took 15 days. She was designed by Isambard Brunel, the famous engineer who built the Clifton Suspension Bridge at Bristol and the main lines of the Great Western Railways.

By the mid-19th century steamships driven by propellers or screws, were in general service and were voyaging on trade missions in all oceans. Marine steam turbines were developed at the turn of the nineteenth century and gradually replaced reciprocating (back-and-forth cranking) steam engines for large vessels, examples being ocean liners of the early 1900s with displacements (weight of water that a ship displaces when fully laden) up to 10,000 metric tons. Oil, rather than coal, was now the favorite fuel for large marine engines.

Some of the newest military ships and icebreakers are fitted with nuclear engines in which heat from a nuclear reactor raises steam in boilers to drive steam turbines. The larger modern ships are classified as warships, passenger vessels, bulk dry cargo ships, tankers for bulk liquids, freighters for mixed cargo, and container ships. The largest of these are the supertankers carrying oil, with displacements of about half a million metric tons and lengths of several meters.