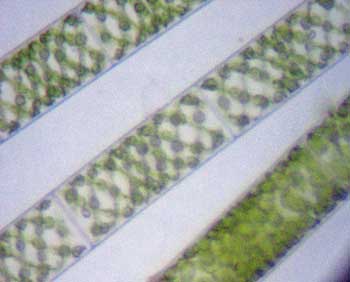 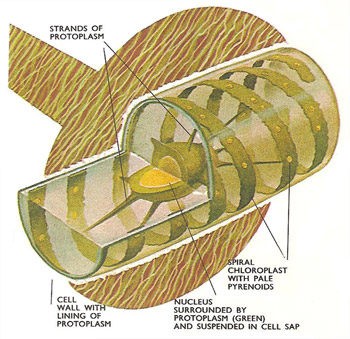 Section through a strand of Spirogyra.

Diagram of the stages of conjugation between cells of neighboring strands. The cytoplasm of one strand (the 'male') passes across into the other (the 'female'). Cells of a single strand will be all male or female.

Spirogyra is a filamentous green alga consisting of long chains of cells. Free-floating, they often appear as scum on still water.

A thread of Spirogyra consists of a string of tiny cells surrounded by a layer of mucilage or slime. All of the cells look alike and all of them act as individual organisms. The thread can be broken into many pieces and each will continue to live and grow. No cell has any special function such as is found in higher plants and animals.

The most noticeable feature of the cell is the spiral chloroplast containing the green chlorophyll. There may be more than one chloroplast and their shapes may help to identify the various species. Embedded in the chloroplast are numerous paler regions called pyrenoids, which are centers of carbon dioxide fixation. The cellulose cell walls are lined with cytoplasm surrounding a space or vacuole. In the center of this space is the nucleus, suspended by strands of cytoplasm. Each cell manufactures its own food from mineral salts, water, and carbon dioxide and is quite independent of its neighbors.

When the water is warm and there is plenty of mineral food and sunlight, the cells grow rapidly and divide at frequent intervals. The chain of cells lengthens rapidly. It often breaks and each fragment quickly grows into a new chain. In this way large masses of the plant soon accumulate.

Under less favorable conditions – for example in the autumn when the water cools down, or during drought – Spirogyra reproduces in another way. Two neighboring threads come close together and tiny projections grow out toward the opposite cells. The projections join and form a tube linking the two cells. By this time, the contents of cells have shrunk and the chloroplast has broken up. The cell contents of one thread move across into the cells of the other thread where they join with the other cytoplasm. A thick wall forms round the joined cytoplasm which is then called a zygospore. This type of reproduction is called conjugation.

The zygospore is released when the old cell walls break up. It may rest at the bottom of the pond or be whisked away by the wind until it finds suitable conditions for growth. These tiny spores are very resistant to drought and cold and can probably remain alive for years. They are responsible for the sudden appearance of Spirogyra in artificial ponds and fish tanks. When they reach suitable sites, the spores germinate and grow into new threads.