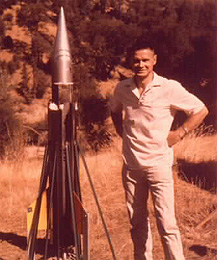 Robert Truax was an American rocket engineer and long-time advocate of small, low-cost launch vehicles. Truax began experimenting with rockets as early as 1932, then became involved with rocket programs as a Naval officer during World War II. He earned a BS in mechanical engineering from the Naval Academy (1939), and later a BS in aeronautical engineering from the Naval Postgraduate School and an MS in nuclear engineering from Iowa State College. After the war he worked on a number of ballistic missile and space launch vehicle programs including the Thor, Viking, and Polaris. In 1959 he retired from the Navy as a Captain, and came to Aerojet where he headed the Advanced Development Division until leaving in 1966 to form his own company, Truax Engineering.