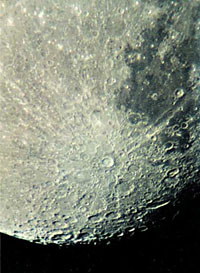 Tycho is a spectacular ray crater that is the most prominent crater on the near side of the Moon. Its clearly visible rays, which extend out as far as 1,500 km, indicate that in geological terms this feature is relatively young, with an age of only about 108 million years (estimated from samples of the rays obtained during the Apollo 17 mission). Tycho is about 85 km (53 mi) across, with a depth of 4.8 km, and lies close to the Moon's south polar region at lunar coordinates 43.3° S 11.2° W. It was the target of the Surveyor 7 probe that touched down north of the crater in Jan 1968.

Research published in 2007 concludes that the impactor which created Tycho came from a enormous collison between two asteroids in the main asteroid belt, some 160 million yr ago.1 This collision, the research suggests, also produced the impactor which struck the Earth 65 million yr ago and gave rise to the Chicxulub crater and the devastating mass extinction in which the last of the dinosaurs died out. See the Chicxulub crater article for more details.

Tycho features in the film and book 2001: A Space Odyssey as the location of TMA-1 (Tycho Magnetic Anomaly 1) which turns out to be one of the enigmatic monoliths placed in the solar system by an alien civilization. In the story, Dr. Heywood Floyd travels from Clavius Base to see the artifact. Tycho also serves as the location of a twenty-fourth century community called Tycho City in the film Star Trek: First Contact.