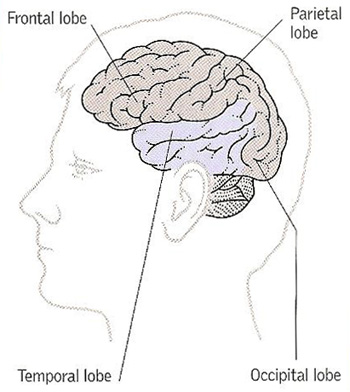 The temporal lobe forms much of the lower side of each half of the cerebrum.

Temporal lobe epilepsy is a form epilepsy in which abnormal electrical discharges occur in the temporal lobe (most of the lower side) of each half of the cerebrum in the brain.

The usual cause of this type of epilepsy is damage to the temporal lobe, which may be due to a birth injury, head injury, brain tumor, brain abscess, or stroke.

Attacks of this form of epilepsy cause dreamlike states, unpleasant hallucinations of smell or taste, the perception of an illusory scene, or déjà vu. There may also be grimacing, rotation of the head and eyes, and sucking and chewing movements. The affected person may have no memory of activities during an attack, which can last for minutes or hours. Sometimes the seizure develops into a grand mal seizure.

Diagnosis and drug treatment is the same as for other forms of epilepsy.