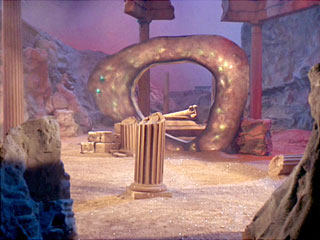 The Guardian of Forever.

A time portal is a hypothetical gateway though which a person could travel in time. Time portals are a staple of science fiction. They may be artificial or naturally-occurring.

The Time Tunnel, a TV series devised by Irwin Allen, which ran for one season of 30 episodes in 1966-67 featured an experimental time machine which could be described as an artificial time portal. More recently, the film Stargate (1994) and subsequent TV spinoffs Stargate SG1 and Stargate Atlantis feature a ring-shaped alien device but the function of this seems to be primarily teleportation rather than time travel.

Time portals have cropped up frequently in the Star Trek universe. Most memorably, the Guardian of Forever, in one of the best of the original series episodes, "The City At the Edge of Forever," propels Dr. McCoy, Mr. Spock, and Captain Kirk back to 1930s Earth and an encounter with American social worker Edith Keeler.

The atavachron, in another original series episode, "All Our Yesterdays," was used by the people of the planet Sarpeidon (doomed by their sun going nova) to escape into their own past. But it is a one-way trip because the device also alters a time traveller's cellular structure. Kirk and co. are thrown into the past too and must somehow find a way back.


Time portals in the real world?

Wormholes, if they exist or can be created, and, furthermore, if they can be kept stable when matter passes into them, might conceivably work as (space)-time portals. However, this is a remote possibility for future science and technology. For now, SF is our only vehicle for speculating about doorways through time.