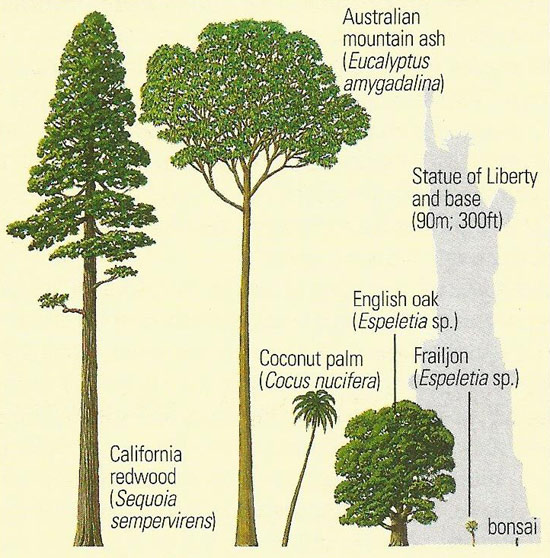 Trees grow taller than any other living thing, but can still survive in miniature form. If the roots are restricted either artificially, as in bonsai perfected in Japan, or by natural means, as when a seed germinates in very thin soil on a mountain, a fully formed tree only a few centimeters high will result. The California redwood, the world's tallest tree, is closely rivalled by a eucalyptus, such as the mountain ash of Australia. The coconut palm reaches its height of 27m (90ft) in a few years. The English oak is one of 450 species of oak that grow as trees, bushes and shrubs. It enlarges slowly – c.4.5m (15ft) – in ten years, but produces wood of prodigious strength. Espeletia grows on snowy ledges more than 400m (1,300ft) up in the Sierra Nevada of California.

A tree is a woody perennial plant with a well-defined main stem, or trunk, which either dominates the form throughout the life cycle (giving a pyramidal shape) or is dominant only in the early stages later forking to form a number of equally important branches (giving a rounded or flattened form to the tree). It is often difficult to distinguish between a small tree and a shrub, but the former has a single trunk rising some distance from the ground before it branches while the latter produces several stems at, or close to, ground level. The trunk of a tree consists almost wholly of thick-walled water-conducting cells (xylem) which are renewed every year, giving rise to the familiar annual rings. The older wood in the center of the tree (the heartwood) is much denser and harder than the younger, outer sapwood. The outer skin or the bark, insulates and protects the trunk and often shows characteristic cracks, or falls off leaving a smooth skin.

Trees belong to the two most advanced groups of plants, the gymnosperms and the angiosperms (the flowering plants). The former include the cone-bearing trees such as the pine, spruce, and cedar; they are nearly all evergreens and mostly live in the cooler regions of the world. The angiosperms have broader leaves and much harder wood; in tropical climates they are mostly evergreens, but in temperate regions they are deciduous.