Formation of a trichome. 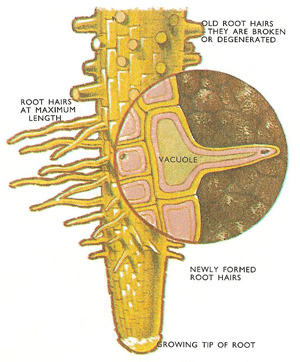 Root hairs develop just behind the growing tip of the root. They increase the surface area through which water is absorbed. 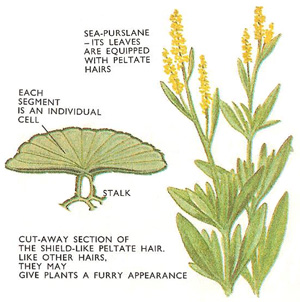 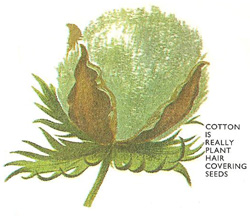 Seed dispersal. Cotton fibers are really plant trichomes. These trichomes, also known as cotton seed hairs, are particularly long. Though each hair is made only of one cell it may elongate until it is over 2 inches long. Cotton is found covering the seeds of the cotton plant. The function of the hairs is said to aid in wind dispersal of the seed. Many other seeds are equipped with hairs for wind dispersal – for example willow and willow herb.

A trichome is a small hair or other outgrowth from the epidermis of a plant, typically unicellular and glandular.

The inside tissues of plants are protected by a tough outside layer called the epidermis. The cells which go to make the epidermis are short and squat. They have thick walls impregnated with fatty substances and so are impervious to water. In addition they are tightly or roots packed together leaving no spaces between them for gases to penetrate.

Some epidermis cells also grow outward. In this way they form appendages or trichomes. Trichome comes from a Greek word which means a growth of hairs and many of the appendages do in fact resemble in appearance the hairs of mammals. But other trichomes are small and merely appear as numerous small 'bumps' while a few are modified into scales.

The shape, size, and structure of the trichomes depend upon their function – whether they are required for absorption, protection, support, seed-dispersal, or secretion.

The trichomes that cover the roots of plants are called root hairs. Their function is to increase the water-absorbing surface area of the root. The hairs are usually tubular in shape and grow directly outward from the epidermal cells of the main root. Usually they are made of one cell only and are very small in size – between 5 and 20 microns in diameter and 80 and 1,500 microns in length. Their walls are thin and most of the inner cavity is occupied with a large vacuole or space. Cytoplasm is concentrated about the sides of the cell. The life of each cell is generally a small one. The cell collapses and the hair sloughs off. But as the root grows in length new hairs develop near the root tip. The old hairs are being replaced continually. A few hairs are known to live much longer but their walls become lignified (woody). They can no longer absorb water and mineral salt from the soil.

Numerous plant stems and leaves are covered with hairs. A series of botanical terms are used to describe the degree of hair development – ciliose (slightly hairy) to glabose (covered in hair). Thick coats of hair trap a layer of air against the plant surface. This layer, undisturbed by air currents retains its moisture and also its temperature. Plants growing in cold climates or regions exposed to the drying conditions of strong sunlight or wind frequently have stems and leaves well covered in hair.

Sometimes the hairs are short-lived. They are needed for protection only when the plant structures are in their early stages – then they are shed. Of the more persistent hairs, some retain their chlorophyll and keep their green appearance. Others lose their living contents, and the empty space inside them fills with air. Such hairs reflect a great deal of the light that falls upon them and they give the plants a white or sheen appearance.

Trichomes may also develop on the petals of flowers. They are so small that they cannot really be called hairs. Instead they are called papillae. They give the petals a soft, velvety appearance and prevent them from becoming wet.

Other trichomes develop as scales – the so-called peltate hairs. They are shield-shaped and usually attached to the plant surface by a short stalk. They are most usually found on the underside of leaves protecting the 'breathing' pores of the plant (stomata). They also develop on some young buds and give protection against desiccation.

The cell walls of trichomes are commonly made of cellulose. They may however become lignified or stiffened by deposits of either silica (SiO2) or calcium carbonate (CaCO3). The sharp rigid hairs give the plant protection against small crawling animals, such as slugs and snails.

Stiff hairs may also assist plants in climbing and adhering to surrounding surfaces. On some climbing plants the hairs may even be hooked, e.g. goose-grass.

Extreme types of climbing aids are the thorns on roses and brambles. Strictly speaking they are not true trichomes for both epidermal and underlying cortical cells go to form them. They are called emergences instead.

Unicellular and multicellular hairs, even the shield-shaped peltate hairs, may be capable of secretion. Special chemical compounds come to be formed inside them which when released perform some special function. Secretory trichomes form some of the most important glands found in the plant kingdom. The most common glandular hairs are multicellular – a number of cells forming a stalk and a head. The actual secretory cells of the structure have large nuclei and dense cytoplasm. Droplets of secretion can be seen inside the living tissues of the young cells. By the time the cell is mature the fluid has usually come to lie between the cellulose wall and the cuticle. When the cuticle breaks down the fluid is released.

Very special kinds of glandular hairs are the stinging hairs. They are perhaps best known as the common nettle. The hair is made of a single secretory cell embedded in a multicellular epidermal stalk. The cell walls of the secretory cells are reinforced with calcite in the lower half and silica in the upper regions. Within the cytoplasm is a large vacuole filled with a complex chemical poison.

Quite broad at its base, the hair tapers to a point near its apex, and then expands into a small spherical tip. If the hair is disturbed by an animal the tip breaks off along a predetermined line of weakness; the sharp tip of the stinging cell is left exposed. It penetrates a skin surface easily. The compression of the bladderlike stalk drives the toxin contained in the main part of the secretory cell into the wound. The toxin is a complex substance known to contain formic acid, histamine, and a serotonin. Inside the skin, it sets up an irritation and causes swellings and flushings of the skin surface.

Stinging is not confined to the nettle. A few plants belonging to three other families are known to have stinging hairs. One Indian stinging plant Tragia cannabina has, as a needle, a crystal of calcium oxalate. If the stinging cell is depressed by contact with a passing animal, the crystal is forced forward, penetrates the skin, and breaks off. Poison enters the body of the animal through the puncture.

Though the hairs differ in detail, their mann of operation is very much the same. But the severity of the poison, however, varies. In the case of the Devil or Fever Nettle of West Africa it can cause fever and sometimes death. So powerful is the poison that even elephants are said to avoid coming into contact with the plant.