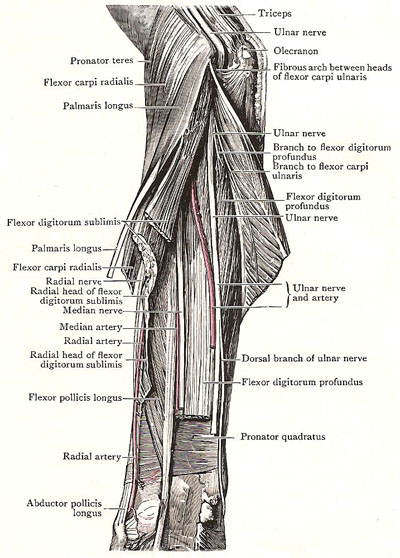 Deep dissection of front of forearm.

The ulnar artery is the larger of the two terminal branches of the brachial trunk. It originates in the cubital fossa, at the level of the neck of the radius. In the upper third of the forearm it passes obliquely downward and medially, and then it proceeds straight down to the wrist. It pierces the deep fascia immediately above the flexor retinaculum, and passes on to the front of it, where it gives off a branch deep and then becomes the superficial palmar arch.


Relations of the ulnar artery

Throughout its entire course the ulnar artery is accompanied by two venae comitantes. In the upper, oblique portion of its course, the vessel is deeply placed, and is crossed by both heads of the pronator terres, the flexor carpi radialis, the palmaris longus, the flexor digitorum sublimis, and the median nerve. Its lower, vertical part is overlapped medially by the flexor carpi ulnaris, but a short distance above the wrist it comes nearer the surface, and lies behind the deep fascia in the interval between the tendon of the flexor carpi ulnaris and the tendons of the flexor sublimis. It has important relations to the median and ulnar nerves.


Branches of the ulnar artery in the forearm

In addition to the muscular branches, there are several that are named.

The ulnar recurrent arteries, anterior and posterior, arise near the elbow, and anastomose with branches of the brachial artery on the front and back of the medial epicondyle.

The common interosseous artery is a short, wide trunk which originates below the recurrent branches, about one inch from the beginning of the ulnar artery. It passes backward to the upper margin of the interosseous membrane where it divides.

The posterior interosseous artery passes backward above the interosseous membrane to the back of the forearm.

The carpal branches of the ulnar artery are small arteries that arise near the wrist. They anastomose with corresponding branches of the radial artery in the formation of the anterior and posterior carpal arches.