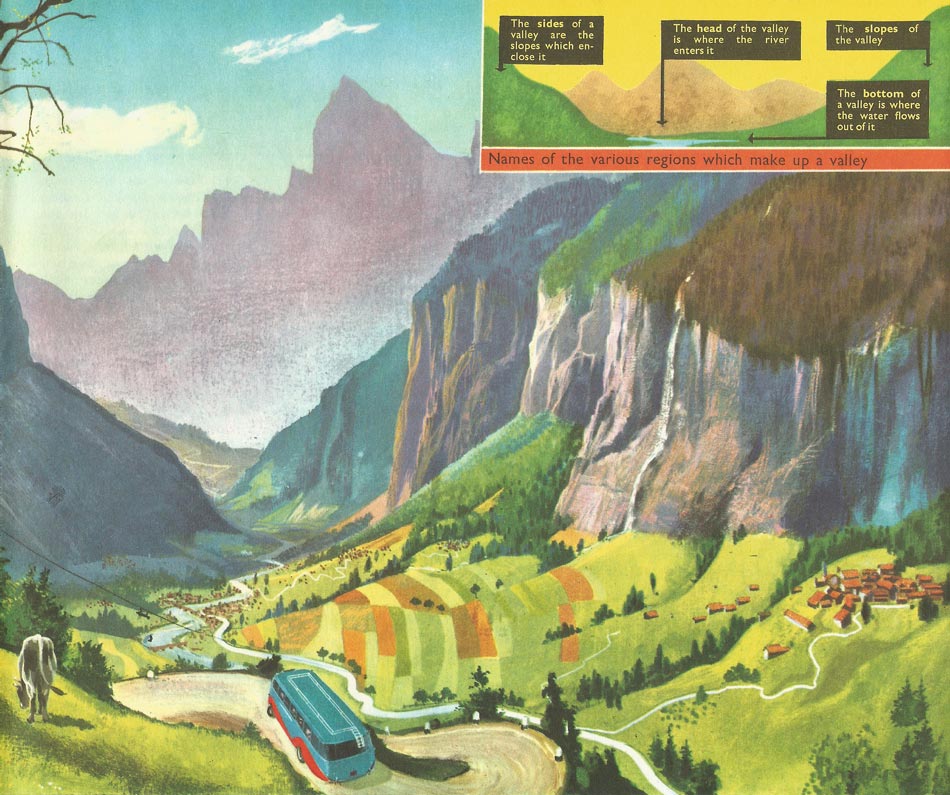 A view through a glacial valley. The ground in the valley is excellent for all sorts of agriculture, including both dairy and arable farming. 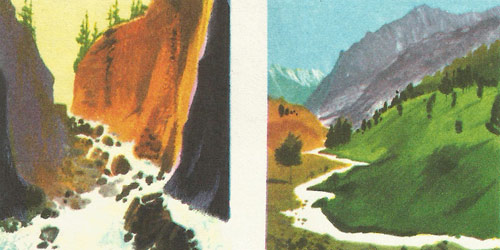 Left: A fast flowing river with steep banks. Right: The later stages of a river where the bed has widened. 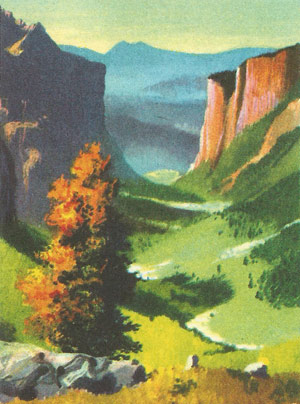 A typical example of a U-shaped glacier valley.

A valley is long narrow depression in Earth's surface, usually formed by glacier or river erosion and fracture. Young valleys are narrow, steep-sided and V-shaped; mature valleys are broader, with gentler slopes. Some, known as rift valleys, are the result of collapse between faults. Hanging valleys, of glacial origin, are side valleys whose floor is considerably higher than that of the main valley.

Most valleys are formed by rivers. When streams rise on a hillside their waters flow down the side of the hill. Because of the steepness of the slope the river runs fast at first, and the force of the water eats into the hillside, forming a narrow channel. At this stage the river (for this is what it is beginning to be) will have a V-shaped bed or channel because it will cut away the bottom faster than the wind and rain can wear away the sides.

Later on, when other waters have joined the river, and when the slope of the hill is gentler, the river will flow more slowly, and the riverbed will become shallower and wider. This is partly because the river is now carrying earth and stones which it has gathered on the way down and which cut away the banks; partly because, as the river cuts out its bed at a slower rate, the wind and rain keep pace in wearing away the banks. Where the rock is too hard for the water to go straight through, or where the slope of the land alters, and the river has to curve, the water undercuts the bank it strikes against, and at the same time deposits some of the earth and soil it is carrying on the inside of the curve. In this way the curve is made larger.

Eventually the banks of the river become so flat and the floor of the river so wide that it is hard to realize that it is a valley at all, for it looks more like a plain. Today, of course, rivers occupy only a small area of the bottoms of the valley we know, since they were made long ago. But nearly all valleys still have water flowing through them.

Another type of valley, known as a U-shaped valley, was formed by glaciers. Glaciers are rivers of ice which move very slowly. The ice grinds deeply into the ground and at the same time smooths out any ridges in its path. As a result glacier valleys usually have deep, flat bottoms and steep sides, and they are also much straighter than river valleys. The glacier picks up all the ricks and other projections that are in its path, breaks them up, and redeposits them smoothly over the ground. This makes a glacier valley smoother and wider so that the bed is often U-shaped. When a stream of ice or snow joins a glacier, the channel is often so deep that the streams have to cascade down the side of the glacier. These tiny valleys which end on the brink of the glacier valleys are called 'hanging valleys'. Glacier valleys can be recognized by the scratches or ridges left on their sides by the ice. Deep U-shaped valleys, formed by the movement of glaciers in the Ice Age, can be seen in the western Grampians, the northwest Highlands, and the southwest of Scotland. Other examples in Great Britain are formed in the Lake District, where lakes such as Windermere, Ullswater, and Derwentwater are contained in valleys that radiate from a central point, and in the Snowdon area of Wales.

Sometimes it happens that the river in a valley is diverted into another course, leaving only a trickle of water in the former riverbed, or even drying up completely. Such a valley is known as a dry, or dead valley. This can also happen when the soil is so porous that the water sinks into the earth.

Some valleys have been formed by a sinking of the land between two fractures in the Earth's crust. These valleys, known as 'rift valleys, tend to be narrow and long. The most famous is the Great Rift Valley, which extends more than 3,000 miles from Syria, through Israel, and into East Africa. The Rhine Valley between the Vosges Mountains and the Black Forest, and the Red Sea are examples of smaller rift valleys.

River valleys, with their fertile soil, plentiful water supply, and protected position, were ideal for early settlements. If the river was navigable it could also be used for transporting goods and people. Thus we find all the ancient civilizations grew up in river valleys: the Chinese (Yangtze River), Indian (Ganges), Egyptian (Nile), and the Sumerian, Babylonian, and Assyrian (Euphrates and Tigris).