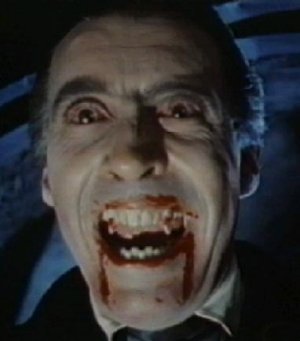 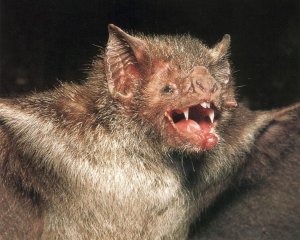 The un-dead, ever thirsty for human blood, once prowled in every graveyard, lay wait in every shadow. Strange beliefs about recently buried corpses permeated the common psyche and so terrified were people of the power of the dead to rise and revisit them that it was not unusual for bodies to be repeatedly disinterred, a gruesome ritual that served merely to fuel the general fear.

Terrible tales spread of the exhumed having startlingly red faces and bodies that were bloated to the point of obesity. It wasn't recognized at the time that these are normal stages in decomposition. The redness is the result of hemolysis and bacterial action staining the tissues, while the plumpness is caused by the body being puffed out as methane and other vapors of putrefaction are released.

What appeared to be fresh skin on the corpses was taken as another sign of continued life. And yet, as every modern forensic pathologist knows, this "new skin" is just the layers of epidermis, revealed as the upper layers peel away. The bloody fluid which oozed from the mouth of some exhumed bodies seemed to confirm the notion that the un-dead fed upon the living. But this gory dribling is due simply to internal pressure pushing out tissue from the disintegrating lungs along the respiratory tract.

Not surprisingly, in such a climate of ignorance and superstition, legends of vampires abounded. In extreme cases, bodies were hauled out of their graves several times a day to demonstrate their alleged reluctance to die properly. As a final ignominy, they would be hacked to pieces with axes or swords and have stakes driven through their chest. Inevitably, the latter led to a post-mortem groan as gas was forced out over the larynx – contributing further to the belief that the creature had indeed still been alive.

Today, the un-dead who come back to drink our blood survive in fiction. And yet the continued popularity of Bram Stoker's dark villain testifies to the subconscious horror – and fascination – we still have of such creatures. is it possible there may be more to the vampire legend than mere superstition?

Dracula could assume many disguises but on a working night he liked to visit his clients in the form of a bat. Real vampire bats, all four species of them, come from South America, and Dracula would not have been displeased by them. Despite being only about three inches long, they are very nasty – and potentially lethal.

While they may not be capable of implanting bizarre sexual urges in their victims, they can certainly pass on another form of madness: rabies. They prefer parts of the body where capillary blood vessels are abundant and near the surface and also where they can get a good purchase. In the case of humans, this generally turns out to be not the neck but the big toe.

With cattle, the preferred target is the ear. The bat's bite may be so furious that it completely severs the muscle, leaving the ear hanging limply down. The cleft at the back of the hoof is another favorite spot on cows and horses, while water buffalo, which may spend the night with only their muzzles unsubmerged, are often bitten on the nostrils.

A vampire is meticulous about its selection and preparation of a biting site. On a new animal it may scout around for half an hour, although it will reopen an old wound in a matter of minutes. First, it moistens its victim's hair with saliva, licking over the chosen spot for 30 to 40 minutes. Then the vampire opens and shuts its mouth repeatedly, honing its long, razor-sharp upper incisors against two deep, scabbard-like pits in the lower jaws. The inner edge of these teeth are used to shave away fur and feathers. When it reaches the hide, the vampire may continue shaving away until several layers of surface skin have been removed and the capillaries exposed. Finally, once the feeding area has been prepared to its satisfaction, the bat grips its victim firmly with its lower incisors, opens its jaws and makes a downward power stroke with the upper teeth, scooping out a neat divot of flesh, which is then laid carefully to one side.

The whole process starts a copious flow of blood which is sucked up through a pair of tubes like a child slurping up lemonade from the bottom of a glass. The vampire's tongue darts in and out, each lap transferring to the throat the blood which it has sucked into its tongue tubes. It may be an hour before the creature's noisome thirst is slaked. And even then, its victim doesn't stop bleeding because the bat's saliva contains a highly effective anticoagulant which leaves the wound seeping for may hours more.

The thought of a human being having a taste for another person's blood is truly horrific. But, in fact, there are medical grounds to suspect that such a craving can exist. A rare condition known as iron-deficiency porphyria results in its victims being unable to produce important chemicals called iron porphyrins in their bodies. Instead, iron-free porphyrins build up in the skin which, as a result, becomes highly sensitive to light. If a person with this condition spends too much time in the sun, their skin can break out in lesions or develop abnormal growths of hair. In extreme cases, fingers and toes may drop off. Under ultraviolet light, a sufferer may even fluoresce. He or she quickly learns to avoid the daylight, and to venture out only at night. And there is another side-effect of this terrible affliction. The gums tighten and shrink so that the teeth appear unusually large and protruding.

Unable to manufacture iron porphyrin, sufferers cannot produce their own heme – the vital iron-rich compound found in blood. So how else could the heme be obtained? Ready-made, by drinking the blood of others. Under normal circumstances, heme in the blood lasts about 120 days before being broken down by an enzyme known as P450. A sufferer of iron-deficiency porphyria would obviously want to avoid taking any more of this enzyme than was necessary. And what edible substance just happens to be especially rich in P450? None other than garlic.

So, vampires may indeed have stalked the Earth in centuries gone by – pale creatures who feared the light, possessed fang-like teeth, had a craving for fresh blood, and learned to dread the presence of garlic. But they were, and are, as human as the rest of us.