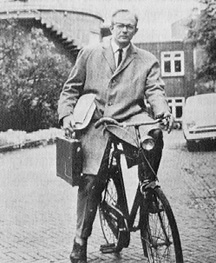 Hendrik Van de Hulst was a Dutch astronomer, born and educated in Utrecht, who made his most important contribution while still a student: his 1944 prediction that clouds of cold hydrogen gas in space should emit and absorb a spectral line at a wavelength of 21 centimeters (see 21-cm line). Following the detection of this radiation in 1951 by American physicists Edward Purcell and Harold Ewen (1922–1997), the Dutch team of van der Hulst, Jan Oort, and C. Alex Muller began mapping the distribution of neutral hydrogen clouds in the Milky Way and delineating its spiral structure. Subsequently, van de Hulst made studies of interstellar grains and their interaction with electromagnetic radiation, investigated the solar corona, and wrote important books on light scattering and radio astronomy.

Based at the University of Leiden from 1948 until his retirement in 1984, he was a leader in several international organizations and in the development of Dutch and European space research.