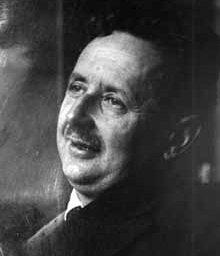 Hermann Weyl was a German-born US mathematician and mathematical physicist (known as "Peter" to his close friends) whose work involved symmetry theory, topology, and non-Euclidean geometry. Weyl studied under David Hilbert at Göttingen. Then, as a colleague of Albert Einstein at Zurich 1913, he got involved with relativity theory and came to believe (erroneously) that he had found a way to unite gravity and electromagnetism. From 1923 to 1938 he concentrated on group theory and made some important contributions to quantum mechanics. As the Nazi tide swept over Europe, Weyl came to the United States and spent the rest of his career at the Institute for Advanced Studies at Princeton. He said: "My work always tried to unite the truth with the beautiful, but when I had to choose one or the other, I usually chose the beautiful." His Group Theory and Quantum Mechanics (1928) is a classic text of quantum theory.