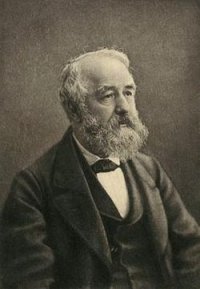 Rudolf Wolf was a Swiss astronomer who, following the discovery of the sunspot cycle by Heinrich Schwabe, amassed all available data on sunspot activity back as far as 1610 and calculated a period for the cycle of 11.1 years. He also co-discovered the link between the cycle and geomagnetic activity on Earth. In 1848 he devised a way of quantifying sunspot activity called the relative sunspot number). Wolf studied at the universities of Zurich, Vienna, and Berlin. He became professor of astronomy at the University of Bern in 1844 and director of the Bern Observatory in 1847. In 1855 he accepted a chair of astronomy at both the University of Zurich and the Federal Institute of Technology in Zurich.