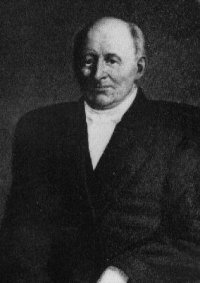 Heinrich Schwabe was a German pharmacist and amateur astronomer who discovered that sunspots follow a roughly decade-long cycle, now know as the solar cycle. His work went largely unnoticed until publicized in 1851 by the German naturalist Friedrich von Humboldt (1769–1859) and used, together with other data, by Max Wolf in 1857 to deduce a cycle of about 11 years. Interestingly, Schwabe's purpose in keeping daily records of sunspots was to help him find an intra-Mercurian planet (see Vulcan) while in transit across the Sun's disk.

Schwabe was born Dessau, near Berlin. He began pharmaceutical studies in Berlin, in the course of which he became interested in astronomy and botany. He returned to Dessau in 1812 to take over his family's pharmacy, while pursuing astronomical and botanical researches as an amateur. His first telescope was won at a lottery in 1825, but the following year he ordered a more powerful one through Fraunhofer. Becoming increasingly absorbed his astronomical studies, he sold the family business in 1829.

Schwabe's observational work was aimed originally at discovering possible planets orbiting within the orbit of Mercury. Starting on October 11, 1825, he observed the Sun virtually every day that the weather allowed, and did so continuously for 42 years. In the process he accumulated volumes of sunspot drawings, the idea being to detect his hypothetical planet as it passed across the solar disk, while avoiding confusion with small sunspots. In 1843 Schwabe still had not discovered any new planet, but instead his 17 years of nearly continuous sunspot observations revealed a 10-year periodicity in the number of sunspots visible on the solar disk. That same year Schwabe published this interesting result in the journal Astronomische Nachrichten, but it attracted little attention until 1851 when his sunspot data was included by Alexander von Humboldt (1769–1859) in volume III of his monumental Kosmos.

Curiously, Schwabe's astronomical researches initially won him greater recognition in England than in Germany. In February 1857 he was awarded the Gold Medal of the Royal Astronomical Society, and in 1868 he was elected to the Royal Society. While Schwabe's fame as an astronomer rests chiefly on his discovery of the sunspot cycle, he is also credited with the first description and drawing, in 1831, of the Great Red Spot on Jupiter.