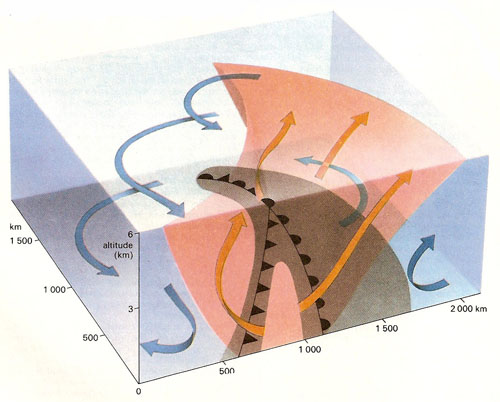 The fronts associated with a mid-latitude cyclone (depression). Here a wedge of warm air (red) is enclosed in an indentation into an air mass of cold air (blue). The system is dynamic, the cold air (left) advancing into the warm sector along a boundary called a cold front. On a weather chart the surface location of a cold front is indicated by a line with pointed teeth. The warm air is also advancing into the cold air region (right) along a boundary called a warm front. The symbol for the surface location of a warm front is a line with solid lobes. The fronts are not just surface features, however, and extend up through the troposphere, each showing a characteristic profile. The cold front usually advances more rapidly than the warm front, the air in the warm sector escaping upward into the lower stratosphere. Where the warm front has already been overtaken by the cold front at the surface, but distinct fronts are still present at higher latitudes, there is said to be an occluded front, and this is indicated on charts by a line with alternated pointed and lobate projections. The air in the warm sector of a mid-latitude cyclone is usually quite moist. As it is forced upward, its temperature falls, the air becomes saturated and precipitation in the form of rain, hail, or snow occurs. It is thus that belts of rain (shaded areas) are commonly associated with all types of cyclonic fronts. Because of the more gentle slop of the warm front, the rain associated with this front is commonly more prolonged but less intense then than that found along the steeper cold front. In the northern hemisphere, cyclonic systems such as this are usually carried along in the mid-latitude westerly wind belt.

A weather front was a boundary between two air masses, one cold and dense, the other warm and less dense. Fronts are regions of uncertain weather: cloud and rain, variable humidity and wind, and low air pressure. A warm front is where warm air advances, displacing cold; the reverse happens in a cold front. An occluded front occurs often toward the end of a system of storms: a mass of warm air is surrounded and forced upward by cold air.

In the Northern Hemisphere the polar front separates the west-moving cold air of polar regions from the east-moving warm air flowing up from the tropics. Warm air flows into "bays" in the front, then cold air in from the rear, resulting in the rotating air system known as a depression.