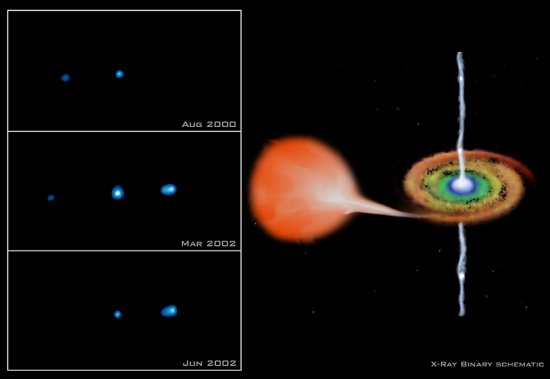 An X-ray jet variable is an X-ray binary in which the matter falling onto the neutron star or black hole primary gives rise to jets. Observations of such systems in our galaxy are shedding valuable light, not only on the binaries themselves but on vastly larger black-hole-powered jets in quasars and other remote active galaxies.

In 2002, astronomers announced that they had tracked the life cycle of jets associated with a black hole, from initial explosion to fading, in the case of X-ray jet variable XTE J1550-564. A series of images from the Chandra X-ray Observatory revealed the two opposing jets traveled at near light speed for several years before slowing down and fading. In the space of just a few years, it was possible to watch developments that would have taken thousands of years around a supermassive black hole in a distant galaxy. Astronomers used Chandra and radio telescopes to observe the jets following an outburst, first detected in 1998 by the Rossi X-ray Timing Explorer. These jets, which require a continuous source of trillion-volt electrons to remain bright, were observed moving at about half the speed of light. Four years later, they were more than three light-years apart, slowing down and dimming.