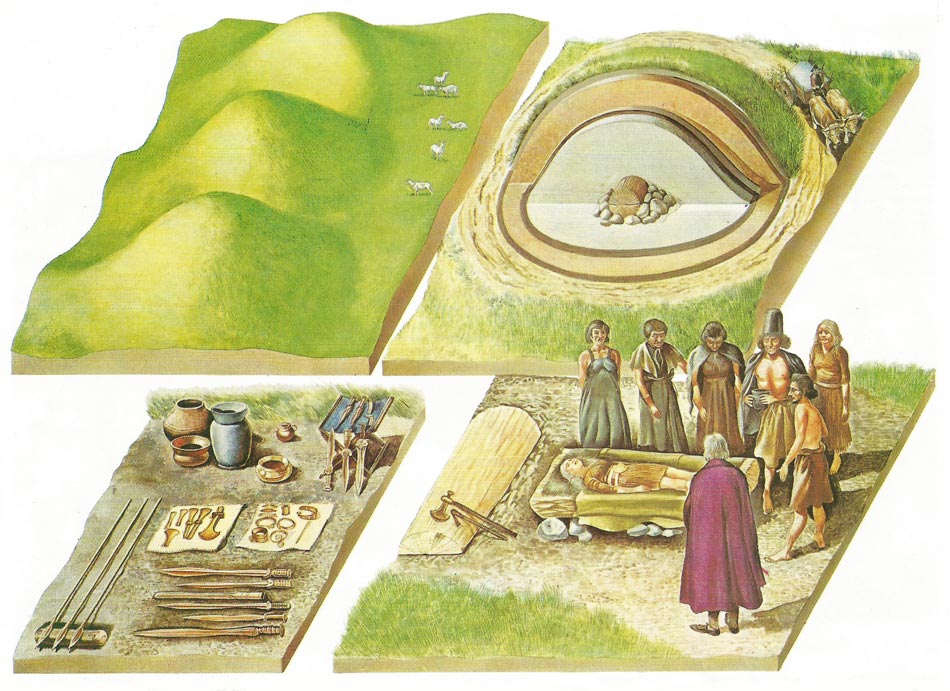 The ancients left their messages for posterity in the graves of their dead, whether great pyramids or simple turf burial mounds. This reconstruction depicts a urial ceremony at Egtved, in east Jutland, a few centuries after the Bronze Age culture had reached northwestern Europe, about 1500 BC. The corpse is to be interred in a round barrow, or tumulus grave mound. Such Bronze Age barrows and long barrows from the Neolithic (New Stone Age) are widespread in western Europe. The corpse, that of a rich young woman, was discovered in a barrow, in a coffin made from a split and hollowed tree trunk. The coffin was enclosed in a heap of stones and then surrounded by an enormous quantity of turf, enough to strip several fields. The dead woman wore a belt ornamented by a large bronze disk, bronze arm rings, and an earring of bronze. The grave objects laid out for the ceremony are varied and plentiful, since they are those of a rich woman. They include weapons, jewelry, and pottery. The weapons are typical of the period and culture; numbered among them are palstaves – narrow bladed axes with high flanges on either side – and small thrusting swords with hilts only large enough for a three-fingered grip. Decorations on the weapons echo those of Mycenaean Greece about 1500 BC. The background to the scene is an aspect of Bronze Age agriculture, a cart drawn by cattle. Seed could have been scattered in front of animals to be trodden in by their hooves. The harvest, if it was of grain, would have been reaped with bronze-bladed sickles. 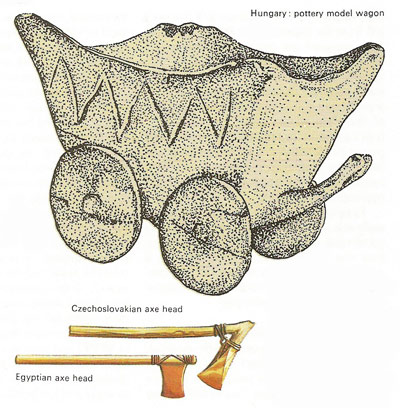 Surviving Copper and Bronze Age artefacts are not all of metal. This pottery model wagon of about 4,000 years ago, was found in Hungary. More common finds are metal axe heads like these from Egypt and Czechoslovakia. 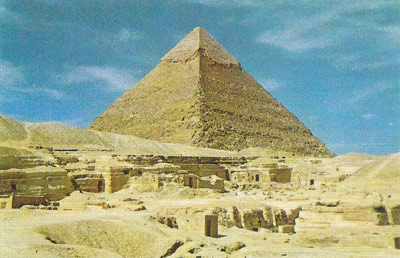 Unable to multiply or divide, the ancient Egyptians achieved a wonder of practical mathematics when they built the Great Pyramid. Its base covers an area of 5 hectares (13 acres) yet differs from a perfect square by only 1.5 cm (0.6 inch). The stone blocks of which the pyramids were built weigh up to 1,000 tonnes and were moved into position without the use of either rollers or wheels. 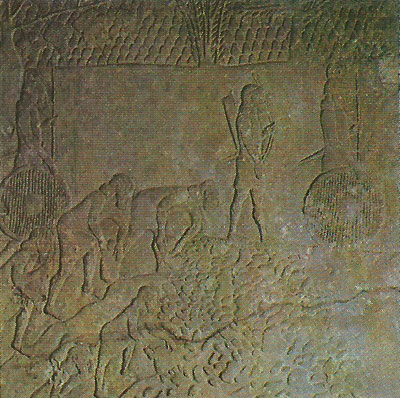 Some Egyptian tombs have pictures carved in relief in rock. Others have paintings executed in water-based paints, to which were often added honey, gum, or egg-white to give substance to the color. The pictures themselves provide a record of the ways of life in various classes of Egyptian society. Officialdom, as in all civilizations, thrived; here a dignitary is attended by many servants. 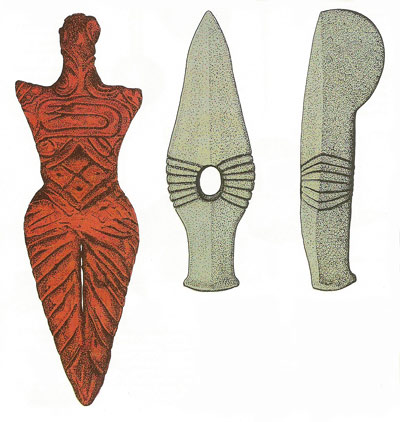 Left: A terra-cotta figurine from the Copper Age of Romania dates from before 3500 BC, and gives some idea of the spread of culture along the River Danube during the time of the earliest metal ages of Sumeria and Egypt. Across the Black Sea, north of the Fertile Crescent, traces of the Copper and Bronze Ages have been found in the Soviet Union. This axe (center) was found at Fatyanovo and dates from the early Bronze Age, about 1000 BC.

The Bronze Age is a period in cultural history, beginning in the Old World in Babylonia from 2,500 to 3,500 years BC, characterized by the deliberate production of bronze. In the New World, in Peru, this period began around 500 or 1000 AD. Settled life and food surplus are typical in the Bronze Age. Urban life began and led to a shift of scribes, artisans, and other socialized occupational groups to the towns. Specialization of labor, leisure time, organized government, the separation of the priestly class, kingships, and organized astronomical data are found. Urbanization appeared particularly in southwest Asia and in Egypt, although its advantages were confined to certain classes. Specialists in commerce arose, as did organized thieves who preyed upon them. Trade items were sometimes buried by merchants to insure their safety.

The Bronze Age in Europe has been divided into two periods. The first, 2,500 to 1,900 BC, saw flat celts, and daggers made of copper or bronze with a small percentage of tin. The second period, 1,900 to 1,600 BC, had a higher percentage of tin. Slightly raised sides are found on the celts, and the triangular daggers have a large median rib. The dagger blade lengthens and swords appear. Pottery with incised decorations is found. The third period, from 1,600 to 1,300 BC, had early long swords with tangs – knives cast with their handles in one piece – and advanced pottery. From 1,300 to 200 BC, the fourth period, there were celts with wing-shaped flanges at the top, swords with a tang to go through the handle, semicircular and double razors and pottery resembling pile-dwelling ware.


Dawn of the Copper Age

Man first used metal about 6,000 years ago in an era from which the beginning of Western civilization can be dated. Earlier the stones he had picked up, perhaps first to throw at an attacker, had been refined into the sharp tools and weapons of the Neolithic (New Stone Age). But now a new material was at hand – the malleable copper which people first, perhaps, picked up as the native (pure) metal and beat into the required shape. When the pure metal became scarce, copper was smelted from the ores containing it. Soon nan was to find that the rather soft copper could be alloyed, by mixing with tin, into the harder, more useful bronze. A new range of skills was now made possible.


Increasing use of metals

The longest Copper Age, that of ancient Egypt, extended before the first dynasty in about 5000 BC until about 3700 BC, after which was bronze was used. But bronze objects had been made earlier still, in the city states of the Fertile Crescent of Mesopotamia where the earliest of all known city dwellers, the mysterious Sumerians, were also the first to use copper. They probably obtained it by trading with miners in Asia Minor.

Europe in general saw the introduction of the Bronze Age about 1,000 years later than did Asia Minor, although some copper artefacts discovered in eastern parts of Europe date from times as ancient as those of Sumeria.

Beyond the deserts and mountains of Asia, the great civilization of China was pursuing its own course, producing ceramics and intricate jade and bronze vessels from 1500 BC onwards. But some ancient societies, such as those beyond the oceans, in Central America, had no metals at all at this time.

The first civilizations were controlled by the priests in theocratic Sumeria, and the civil servants of aristocratic Egypt. They also created the first slaves, war captives whom it was more profitable to put to work than to kill. Thus there was a need for both utility and luxury goods, including those made of metals, and a labor force existed than released artisans to do skilled work in shaping tools and ornaments.

The largest class, however, remained the peasant farmers. They also needed metals, in the form of plows, hoes, axes, and other edge tools which in Neolithic times had been made of wood and stone. In times of war, many peasants were recruited as soldiers and, as at other times in history, peaceful metal-working was adapted to the production of bronze helmets, battle-axes, spearheads, daggers and later swords.

Huge sacred buildings were constructed by slaves both in Mesopotamia and Egypt. In Mesopotamia, pyramidal ziggurats were used for astrological observations and as temples. In Egypt, the pyramids were the greatest and grandest tombs ever built. Interred with each Egyptian luminary were all kinds of domestic and luxury objects to be taken into the next world. The tomb of the pharaoh Tutankhamen, the most intact yet discovered, contained a wealth of luxury articles made of bronze, gold, silver, ivory, and glass. If a relatively unimportant 18-year-old pharaoh deserved all this, then it is probable that even richer tombs once existed, containing still greater funeral hoards.

Egyptian civilization, with only a few major upsets, endured for more than three thousand years. In contrast, the civilizations of Mesopotamia came and went over the centuries. The Sumerians, who had invented writing and the wheel, disappeared and were replaced by the Akkadians in 2350 BC. The Akkadians left behind one of the great Bronze Age sculptures, that of their warrior king Sargon I, which still survives. In their turn, the Akkadians were swept away by the Amorites, who gave way to the Hittites in 2000 BC. The Hittites came from Anatolia and were the greatest of ancient ironworkers and steelmakers. They belong not to the Bronze Age but to the succeeding Iron Age.

Why copper and bronze should have been employed so long to make axes, hammers, and heavy weapons is at first glance odd, since iron ore was plentiful, and iron is harder and tougher than bronze.

The answer to why the Bronze Age lasted for more than 3,000 years part lies in the technology that was available. Copper will melt at 1,083°C (1,981°F), whereas iron melts at 1,539°C (2,802°F), and cannot be melted for molding without the use of some kind of force draft or blast furnace. Even the Hittites lacked such a furnace: they beat the metal out of roasted, but not melted, ore True smelting of iron came even later.

Bronze could be strengthened by the addition of small amounts of zinc, antimony, and other elements that improved its hardness and toughness. These elements were at first present in ancient bronze as impurities but later were probably added deliberately. At first, the mixtures of copper and tin of their ores were made haphazardly. But later, as skills improved, they were mixed in definite proportions for different bronzes.

The Sumerians also hardened bronze by hammering, and made nails from it. They made wire, sheet, and castings (in gold and silver, also) in clay molds by the cire perdue, or lost wax process, which continued to be used for thousands of years (as in the Benin sculptures of West Africa).