drums of the Far East 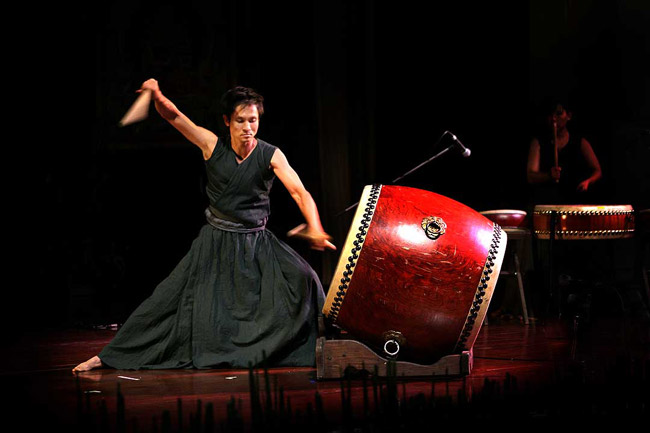 This taiko is made out of a single piece of wood from a 1,200-year-old tree.

Drums are widely used in traditional music in the Far East, along with a diverse range of cymbals, gongs, metallophones, and untuned wooden idiophones. In much traditional music of this region, the drum is played by the director of the ensemble, who uses specific signals for the other performers.

Most Chinese drums (gu) are frame drums or barrel-shaped drums, and are played with sticks. They are often used in folk music and in the Chinese classical orchestra. The director of the Chinese opera orchestra plays the bangu, a frame drum with a pigskin head with a small hole in it. The player strikes the edge of the hole with bamboo sticks. The tanggu, 20–100 centimeters (8–40 inches) in diameter and 60–80 centimeters (14–32 inches) long, is a double-headed barrel drum with cow-, pig-, or goatskin heads nailed to the body of the drum. The tanggu is used in many types of Chinese music. The drum can be suspended in a frame or worn from a harness in folk music and dancing. A large tanggu, or lion drum, is played for the traditional Chinese lion dance performed on the first days of the Chinese New Year.

Japanese daiko or taiko drums are a family of barrel-shaped, double-headed drums played with sticks. In feudal Japan, daiko were used for military music and to give signals in battles. Today they are used for temple services and for traditional dancing.

Within the family of daiko drums, there are drums with heads that are laced (shime-daiko and those with heads that are nailed on byou-daiko). Shime-daiko have floating heads pulled taut by a lace of tension cords and can be tuned. They are slung from the neck and shoulders, allowing the performer to dance while playing. Kotsuzumi and tsuzumi are hourglass shime-daiko made from cherry wood and played in the orchestra of traditional Japanese theater. They are played with the hands, and – as in the Chinese orchestra – the drummer directs the rest of the ensemble with drum beats, and calls to the other musicians.

Byou-daiko (tack drums) are carved from a single log. Their cowhide heads are carved from a single log. Their cowhide heads are nailed on and thus produce only one fixed tone. The nagado-daiko is most widely used in Japanese music. It can be played by two performers, one striking the head and on striking the barrel of the drum. Nagado-daiko range from small ko-daiko, 30–45 centimeters (12–18 inches) diameter, to the giant o-daiko, 240 centimeters (96 inches) diameter and 240 centimeters (96 inches) long, which are among the biggest drums in the world. Some o-daiko are so large that they are not often moved and are housed in a temple or shrine. These drums have become popular in the West through touting taiko ensembles (kumi-daiko) which combine ritualistic displays of martial arts strength and stamina with drumming expertise.

The changgo, 30 centimeters (12 inches) diameter and 60 centimeters (24 inches) long, is a double-headed hourglass drum played in court and folk music, as well as dance and shamanistic music throughout Korea. It usually has a wooden body, often turned from a single log, and floating heads held in place by a single rope laced in a 'W' formation. The drum is either strapped to the body of the performer is dancing, or is placed on the floor. The drum is constructed to make the left-hand head deeper than the right. The left-hand skin is made from cow- or deerskin, which is deep and resonant in tone. It is played with a heavy round-headed beater. The right-hand skin is made from dog- or horse-skin which gives a light and ringing tone and is played with a light bamboo stick in the right hand. The right-hand skin is also tightened with bracing sleeves.

Since the 1980s, the work of Samulnari groups (the name means literally 'play four things') have revived an interest in traditional arts among Koreans. Samulnori perform a virtuosic concert version of nongak (traditional Korean farmers' drumming) using the four traditional instruments of the farmer's band: the changgo, the barrel drum called the puk, and the two gongs kkwaenggwari and ching, which has a rising tone when struck. Master drummers working in this style have developed an exacting and complex performance technique for the changgo that takes years of careful practice to attain.