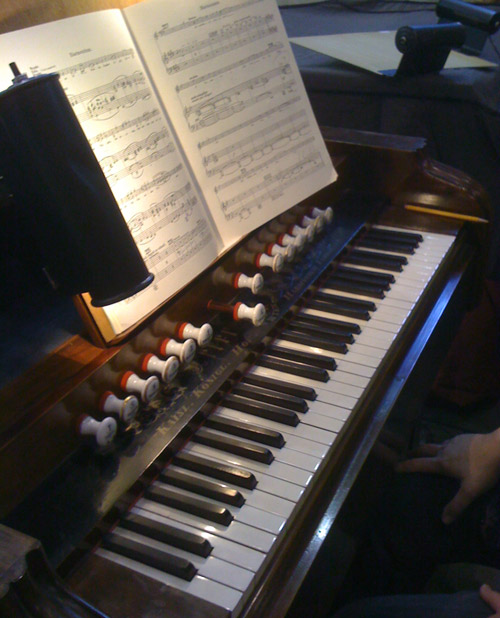 Often regarded as the country cousin (and hence the bumpkin) of the organ family, the harmonium did add a touch of warmth to many nineteenth-century rural homes, where the purchase of a piano would have been an unaffordable luxury. But the two instruments often cohabited, too.

Today, unlike the piano, the harmonium is a rarity, ousted among other things by its electronic successors, but it was never a bumpkin. Many distinguished composers have taken it very seriously, among them Tchaikovsky, Gioacchino Rossini (1792–1868), Antonin Dvorák (1841–1904), Cesar Franck (1822–90), Camille Saint-Saëns (1835–1921) Max Reger (1873–1916), and the lesser-known (though famous to organists) Siegfried Karg Elert (1877–1933), who not only wrote a book in the art of registration on the harmonium but toured as a recitalist on it.

Saint-Saëns wrote a set of six pieces. Frenck arranged his own Prelude, Fugue, and Variations and composed many other pieces specifically for the instrument. The original scoring of Rossini's Petite Messe solenelle was for two pianos and harmonium. The only keyboard music Hector Berlioz (1803–69) ever wrote are three pieces for harmonium (1845), and nothing in the chamber-music repertoire exceeds the charm and warmth of Dvorák's delectable Bagatelles (opus 47) for two violins, cello, and harmonium.

The harmonium belongs to the family of 'free-reed' instruments that includes not only the accordion and concertina but such ancient instruments as the near-universal jew's harp and the sheng of China, whose importation to St. Petersburg in the eighteenth century is said to have directly inspired the precursors of the harmonium.

In all of these, the sound is produced by 'reeds' (generally brass in the case of the harmonium) mounted in a frame and set vibrating by gusts of air, usually activated by bellows. In the case of many early, portable harmoniums – especially in America, where they are often called melodeons - the instrument rested on the knees, the bellows being operated by one elbow while the hands attended to the keys.

At the grander end of the spectrum there is the handsome two-manual instrument, like the harpsichord and the smaller organs, the reeds now encased in an impressive cabinet, while the bellows are pumped in alternation by the feet. The volume of tone, and a measure of shading too, is directly affected by the speed of the pedaling, and multiple ranks of reeds constitute stops of varying tone quality and register, analogous to those of a pipe organ. In the larger harmoniums there are two 'knee swells', one of which, by a sideways pressure of the knee on a projecting piece of wood, brings the full power of the instrument into action, while the other operates on the principle of the swell pedal of the organ. The standard repertoire consisted of many hymns and sentimental songs, offset by a soufflé of polkas, waltzes, marches and simple arrangements of operatic arias.

The decline of the harmonium in the west was balanced in the twentieth century by its enormous popularity in the Indian subcontinent. It reached India by means of missionaries, who took with them French, hand-pumped versions of the instrument. Its ease of use and portability quickly made it popular among the native people. In the following decades, the Indians took the basic French design of the harmonium, and further developed it, adding, among other things, drone stops and a scale-changing device.

The instrument remains an important part of Indian music to this day, particularly among Sikhs (to whom it is known as the vaja), who use it in their prayer-songs. It is considered to be a versatile instrument. Until recently it was largely heard as an accompaniment to vocal music in India, along with the tabla. However, in the past few years, more and more Indian musicians have seen the harmonium's potential as a solo instrument. Among the pioneers of this breakthrough are Pandit Tulsidas Borkar and Arawind Thatte.