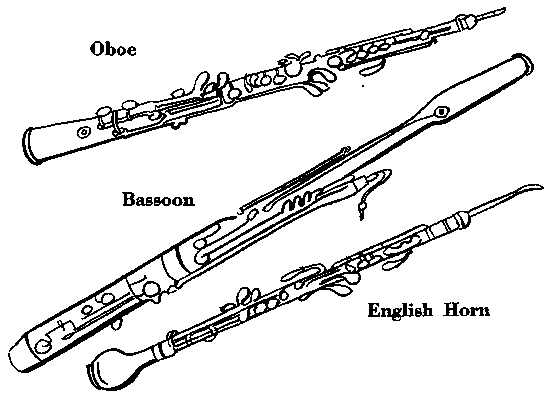 The oboe family is a family of woodwind instruments, each of which has a double reed and a conical tube. Its roots stretch back about 2,000 years. The medieval shawms and schalmeys (high-pitched instruments) and pommers and bombards (low-pitched instruments), and the curtall and double curtall were members of this family. The hautboy was a primitive form of the modern oboe, the latter dating from roughly the time of Haydn and Mozart.

The chief present-day members of the family are:

(1) The oboe, with its pleasant, strangely penetrating sound.

(2) The cor anglais (or 'English horn', though it is neither English nor a horn), an alto oboe with a pitch a fifth below that of the oboe. To avoid it being a little too long for the player, the reed is inserted in a metal tube which is bent back.

(3) The bassoon, the bass member of the family, of which the whole tube is bent back on itself and the reed brought within reach of the player's mouth by a curved tube.

(4) The double bassoon, which resembles the bassoon but is longer and an octave lower in pitch.

All these are non-transposing instruments with the exception of the cor anglais, the music for which is written a fifth higher than the instrument sounds.

Less familiar members of the oboe family, include:

(5) The obsolete oboe da caccia, a predecessor of the cor anglais, which nowadays, in old music, takes its place.

(6) The oboe d'amore (obsolete except for revival in a few modern scores); it is intermediate in size between the oboe and the cor anglais, has a pair-shaped bell, which gives it an individual tone color, and is a transposing instrument, its music being written a minor third higher than the effect desired.

(7) The E-flat oboe, a high-pitched instrument used in some military bands, is a transposing instrument written for a minor third lower than it sounds.

(8) The obsolete tenoroon is a small bassoon, a fifth higher in pitch than the normal bassoon.

(9) The heckelphone is a sort of baritone oboe used by Strauss and Delius It is generally written for in the treble clef an octave higher than it sounds. (Possibly when some composers specify 'bass oboe' they mean this instrument.)

(10) The sarrusophone, a wind-band instrument, made of brass. A transposing instrument, it exists in six sizes ( in keys E flat and B flat) from that of the oboe to that of the double bassoon.