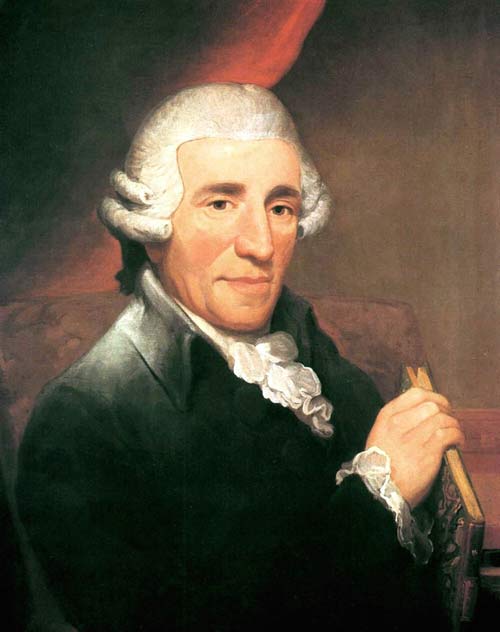 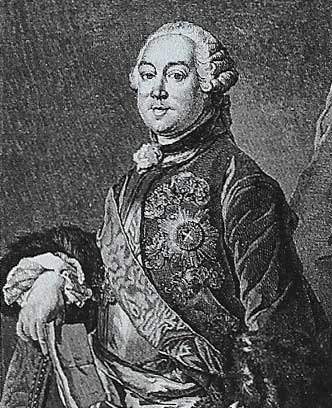 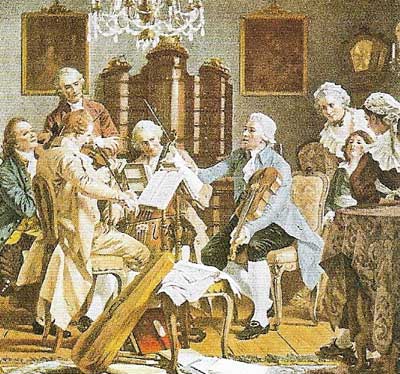 A 19th-century artist's impression of Haydn and friends playing string quartets. Haydn was a good violinist. 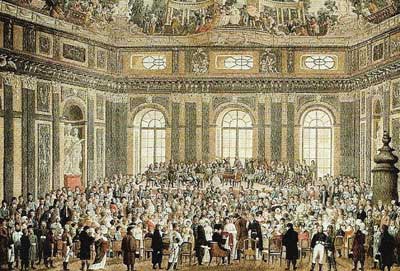 Haydn's last public appearance , at a performance of his oratorio The Creation in the Great Hall of the University of Vienna on 27 March 1808, in honor of his 76th birthday.

Joseph Haydn was born on 31 March 1732 and became one of the most prominent and prolific composers of the Classical period. He was instrumental in the development of chamber music, such as the piano trio, and his contributions to musical form have earned him the epithets "Father of the Symphony" and "Father of the String Quartet".

A lifelong resident of Austria, Haydn spent much of his career as a court musician for the wealthy Esterházy family at their remote estate. This isolated him from other composers and trends in music until the later part of his life, when he was, as he put it, "forced to become original".

At the time of his death, aged 77, Haydn was one of the most celebrated composers in Europe. He was the brother of Michael Haydn – himself a highly regarded composer – and Johann Evangelist Haydn, a tenor. He was also a friend of Mozart and a teacher of Beethoven.

Haydn was the eldest and longest lived of the four great composers of the so-called "First ' Viennese School". Born when Bach and Handel were at the height of their fame, he outlived his friend Mozart by 18 years, and saw his former pupil Beethoven well established in his own career. It was Haydn who practically invented the Classical musical forms of symphony, concerto, string quartet, and sonata. Mozart, Beethoven and Schubert all owed an incalculable debt to their genial, hard-working predecessor.

Haydn's life spanned a period of great social change. He was one of the last major musicians to work for a single aristocratic patron – in his case, the Hungarian Esterházy family, whose seat was the castle of Eisenstadt, some 80 kilometers (50 miles) from Vienna. The arrangement worked quite well for Haydn – his employers treated him fairly – but in their eyes he was no better than a servant. His life-long desire for freedom was granted only towards the end of his long career, when he was effectively pensioned off and was able to travel and enjoy his spreading European reputation.

Haydn was one of 12 children born to the village wheelwright in Rohrau, about 50 kilometers (30 miles) southeast of Vienna. When he was only six, his budding musical talent was noticed by his family and neighbors, and a relative in Hainburg, who was a schoolmaster, offered to take the child as a boarder and begin his musical education. Shortly after his eighth birthday, Haydn was taken on as a choirboy at St Stephen's Cathedral in Vienna, under the harsh regime of the choir-master Karl Georg Reutter. Haydn said later in life: "I never had a proper teacher. I started with the practical side ... I listened more than I studied, and tried to turn to good acciunt all the things that had impressed me".

Haydn left the choir in 1749, and for the next decade he eked out a meager living in Vienna as a music teacher. His major breakthrough came when Prince Paul Anton Esterházy happened to hear a symphony of Haydn's and immediately offered the young composer a job. Haydn accepted but first took the disastrous step of getting married. His first love had become a nun and perhaps out of a mistaken sense of duty to her father, Haydn agreed to marry her elder sister, Maria Anna Keller. His wife turned out to be bad-tempered, unattractive, and didn't care "whether her husband was a cobbler or an artist". She was also apparently unable to have children. During the years ahead Haydn found consolation with other women, but by the time his wife died in 1800 he was too old to think of remarriage.

In May 1761 Haydn took up his new post. His duties included training the choir and orchestra at Eisenstadt, maintaining all the instruments and music, and keeping discipline. He was also required to compose to order. Among the first works that Haydn wrote for his new patron were three symphonies called Morning, Noon, and Evening, possibly intended to be played by the prince himself.

Less than a year later, Prince Paul Anton died. His successor, his brother Prince Nikolaus, was far more socially ambitious (he acquired the nickname "the Magnificent"), and soon Haydn found himself turning out a stream of music for his patron's entertainment: symphonies, concertos, string quartets, trios, and a vast quantity of chamber music for the prince's own instrument, the archaic, six-stringed baryton (similar to the viola d'amore).

In 1764 Nikolaus decided that Eisenstadt was no longer equal to his pretensions. He ordered the construction of a new summer palace – fit for a prince – on the shores of Lake Neusiedler. It had 126 lavishly decorated guest rooms, an art gallery, a concert hall, a ballroom, and a 400-seat theater. The Empress Maria Theresa attended a performance of one of Haydn's operas there in 1775, and declared: "If I want to hear a good opera, I go to Eszterháza." All in all, Haydn wrote some 25 operas for Eszterháza, including L'infedeltà delusa (Infidelity Deluded, 1773), Il mondo della luna (The World on the Moon, 1777), and Armida (1783).

While Haydn enjoyed the isolation of Eszterháza, where there was no one to bother him, and he was, as he said, "forced to become original", the other musicians hated it. Each year Prince Nikolaus found it harder to tear himself away from his fairy-tale palace, and he and his courtiers spent as little time at Eisenstadt as possible. But many of the court musicians had families in Vienna, and they begged Haydn to intercede with the prince. His witty answer was the Farewell Symphony (No. 45), written in November 1772, in which one by one the musicians left the stage, packing up their instruments and blowing out their candles, until only two violins were left playing. The prince apparently took the hint.

The Farewell Symphony is one of a group of distinctive symphonies written during the 1770s in the fashionable, literary-influenced style known as Sturm and Drang ("storm and stress"). Many are in unusual keys, and exhibit a wide variety of moods. The same emotional style also influenced Haydn's other work of the period, including his highly original string quartets – of which he wrote 68 – and piano sonatas.

By the 1780s, Haydn's international reputation was spreading rapidly, and he managed to negotiate a new contract with his employer which allowed him to compose for other patrons, and to have his works published. In 1785 he became a Freemason, and around the same time he was commissioned to write several symphonies by a Parisian masonic lodge. The result was the "Paris" symphonies (Nos. 82–7) – several of which carry nicknames such as The Bear, The Hen, and The Queen (a tribute to Marie Antoinette). Their success helped to consolidate his fame abroad.

After the death of Prince Nikolaus Eszterházy in 1790, Haydn was free to travel for the first time. He was persuaded by the impresario Johann Peter Salomon to visit London, where he was – to his surprise – feted by the court and high society. In July 1791 Oxford University honored him with the degree of Doctor of Music. His twelve "London" symphonies (Nos. 93–104), some again with nicknames including The Surprise, The Miracle, The Military, and The Clock) met with great public enthusiasm. Haydn made a further trip to England in 1794–1795, but resisted King George III's invitation to stay permanently.

Haydn returned to Vienna as Kapellmeister to a new Esterházy prince, Nikolaus II, who in contrast to his predecessors required only sacred music for his newly austere court. Between 1796 and 1802 Haydn produced six fine masses, including the Missa in ternpore belli (Mass in Time of War) and the Missa in Angustiis (Nelson Mass), both reflecting the political turmoil of the Napoleonic wars. He also wrote two Handelian oratorios, Die Schöpfung (The Creation, 1798) and Die Jahreszeiten (The Seasons, 1801). These, his last major works, teem with vibrant detail and an undimmed creative impulse.

The increasingly frail composer made his last public appearance at a performance of The Creation at Vienna University in honor of his 76th birthday, and died at the end of May 1809, during the Napoleonic occupation of Vienna. The whole art-loving world of Vienna attended his memorial service, which included a performance of Mozart's Requiem. Eleven years later his remains were reinterred in the chapel at Eisenstadt.