The instruments of Harry Partch 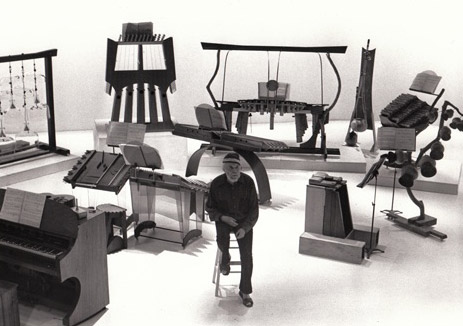 Harry Partch modified existing instruments and built new ones from scratch so they could use different tuning systems.

The invented instruments of American composer Harry Partch (1901–1974) were constructed to play in his own system of just intonation, making extensive use of microtones. Rejecting western music theory, and influenced by the tuning systems of non-western traditional music, Partch created the monophone in 1930. This was basically an adapted viola that could play a 29-tone octave, and was followed in 1933 by a guitar that played a 37-tone octave, and in 1935, by the ptolemy, a bellows-reed organ that played a 43-tone octave.

Partch created mainly bowed and struck chordophones, like the harmonic canon, and idiophones made from wood, glass, and metal. Many of his instruments are beautiful sculptural objects in their own right. He used natural materials in boos I and II, large bamboo marimbas with six ranks of tuned bamboo tubes, and found objects such as the mazda marima, which is 24 tuned light bulbs, and Whang Guns, which are sheets of sprung steel controlled by pedals. Partch composed extensively for his own instruments, often combining them with music drama and singing.