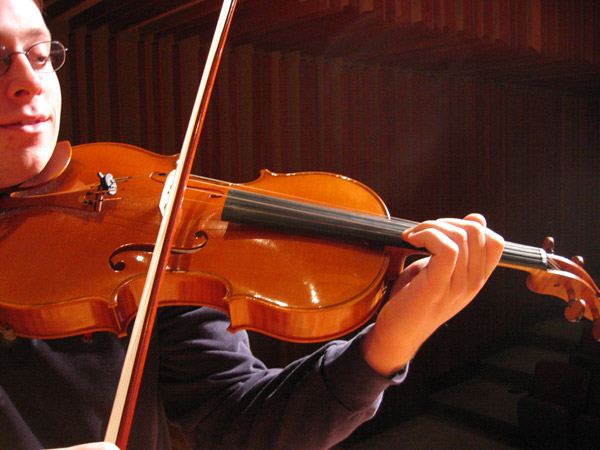 The viola's body is larger than the violin's; consequently the sound is produces is warmer and deeper. Its four strings are tuned a perfect fifth below the violin to c-g-d'-a'- but here there is a problem: the ideal length for viola strings would make the body too long to be held by the arm. Violas range in size from 38 centimeters (15 inches) to 48 centimeters (19 inches), sometimes larger. The perfect length would be 53 centimeters (21 inches), but this would be a laptop instrument, so the choice of size is left to the individual player.

From the beginning, the viola has been the subject of mockery: musicians learn the viola, it is said, only after they have too few teeth left to play the French horn. Although it retains the aura of a dunce instrument – dating from its construction made it difficult to play with any virtuosity – the viola proved its immense musical worth hundreds of years ago. Georg Philipp Telemann (1681–1767), Johann Stamitz (1717–1757), and Mozart provided early concerti; Beethoven, Carl Maria von Weber (1786–1826), Hector Berlioz (1803–69), and Mendelssohn soon expanded the instrument's reputation for solo playing.

The great works for viola, though, came in the twentieth century. Composers including Bartók, Walton, Paul Hindemith (1895–1963), Ralph Vaughan Williams (1872–1958), Benjamin Britten (1913–76), Dmitri Shostakovitch (1906–75), and Luciano Berio (1925–2003) all wrote excellent solo works. Not only that, but the viola took up a more prominent position in the orchestra. It is today regarded as one of the most beautiful and expressive instruments.