In stringed instruments a musical note is produced by a vibrating string. To make it vibrate the string may be bowed, plucked, or struck. 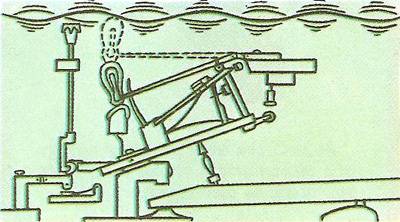 The piano is a stringed instrument. The strings vibrate when struck with hammers tripped by the lever action of the keys, thus producing a musical note.

From left to right: 1. Drawing a bow across a violin string causes it to vibrate and shake the surrounding air. 2. With a trumpet it is not the instrument that sets the air vibrating but the lips of the player. 3. The flute player blows across a hole in the instrument and this causes the air to vibrate. 4. The air is caused to vibrate in instruments like the oboe when it strikes the sharp edge of a flexible reed. 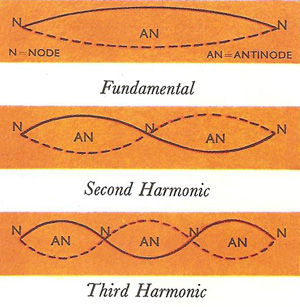 Most people would agree that the sound made by a pneumatic drill is just plain noise. At the same time most would also agree that a bow drawn across a violin string produces a musical sound. Yet both are vibrations. The difference between them is that the vibrations of a violin string occur at regular intervals whereas the vibrations of the pneumatic drill don't. This is what decides whether a sound is musical or simply noise. It can be proved by taking two disks, one having holes punched at regular intervals around it and the other with holes at irregular intervals. If both disks are spun and a jet of air directed at each, then the disk with the regularly places holes will produce a musical sound or tone like a humming top, while the other disk will simply make a noise. In one case the air has been made to vibrate regularly (by first bouncing off the disk and then passing through a hole) and the other to vibrate irregularly.

Sound waves are a succession of 'push and pull' impulses started by a vibrating body and carried by the air to our ears. Air in contact with the sources of vibration, like the violin or the reed of a saxophone, for instance, is alternately compressed and expanded by the string or reed. This makes the air beyond vibrate at the same rate and thus the pressure waves travel outward. One complete 'push and pull' cycle, and the number of cycles per second sent out through the air is the frequency of the vibration. This determines the note or pitch of the sound. The more vibrations per second, the higher the pitch.

The human mind is expert at judging the relationship between a certain series of notes and even a slight mistake in pitch for one of them is unpleasant to the ear. The relationships that are pleasing are arranged in a scale (doh, ray, me, fah, soh, lah, te, doh). Each of these notes has a different frequency and the relationship or ratios between them form the diatonic scale. If any series of notes is played in these ratios the result will be a scale, no matter which note (frequency) is taken as the starting point.

The diatonic scale runs into difficulties with the piano, because if it's made and tuned to give a perfect scale starting at, say, C as doh, the result is displeasing if we try to play the scale starting with D as doh. In order to play a true scale for every note there would have to be about 70 notes per octave, which would make the piano impossible to play. The compromise that's been adopted is the tempered scale, much favored by the composer Johann Sebastian Bach (1685–1750). It is designed so that a scale can be played starting with any note, and although the ratios are never exactly right they are near enough to satisfy the musical ear.

A piano could never sound like an oboe, yet both can play the same note with the same intensity. There is a difference in quality of sound of the same note and this is based upon something called harmonics. The point of greatest movement of anything vibrating is called the antinode and the point of no movement is called the node. Touch a vibrating string lightly, exactly at the center, and instead of having one antinode (in the center) it will have two points of greatest movement, while the central point will become a node. The string, all the while playing the same note, is then sounding its second harmonic. Divide the string into three vibrating parts and it would be playing its third harmonic, and so on. A string or column of air can produce several harmonics all at once. It can vibrate as a whole and as various segments at the same time. So most musical instruments play harmonics, together with their fundamental (first harmonic). Each instrument has a different selection of harmonics and thus a different quality of sound.