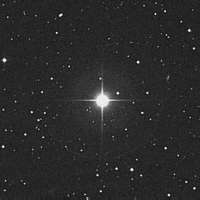 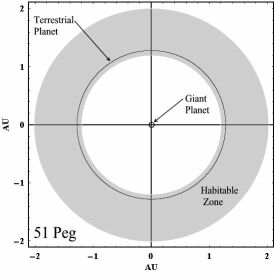 51 Pegasi is a Sun-like star around which has been discovered a planet, 51 Pegasi b, with about half the mass of Jupiter. With the exception of some pulsar planets, 51 Pegasi b was the first exoplanet to be found. It is the prototype for a new and previously unsuspected class of planet known as epistellar Jovians, or "hot Jupiters," with remarkably small orbits. The existence of giant planets very close to their host stars has led to the suggestion that inward orbital migration is a common feature of young planetary systems.

51 Pegasi b orbits its host star at less than one eighth the distance of Mercury from the Sun so that, assuming it has a radius of 1.2 to 1.4 times that of Jupiter, it must have a surface temperature of around 1,000&#176C. Even so, calculations show that it should still be able to retain a massive atmosphere of predominantly light gases.

51 Pegasi ranked in the top five stars most likely to support life in a shortlist drawn up in 2006 by astrobiologist Margaret Turnbull, one of the authors of HabCat (Catalog of Nearby Habitable Systems).

In 2001, astronomers at the University of Texas at Arlington published results showing that the habitable zone around 51 Pegasi, where an inner rocky planet (with suitable mass and atmospheric composition and density) can have liquid water on its surface, lies between 1.20 and 2.0 AU of the star. Unfortunately, the development of an Earth-like planet in this zone could have been disrupted since it would likely be expelled by the inward migration of planet b, as hypothesized by some planetary astronomers. If a small, rocky planet could have developed without the interference of planet b, however, then stable orbits appear to be possible over the entire habitable zone. A terrestrial planet orbiting 51 Pegasi at around the center of the calculated habitable zone would have an average orbital distance of about 1.6 AU, just beyond the orbit of Mars in the Solar System. Its orbital period would be about 2.0 yr.