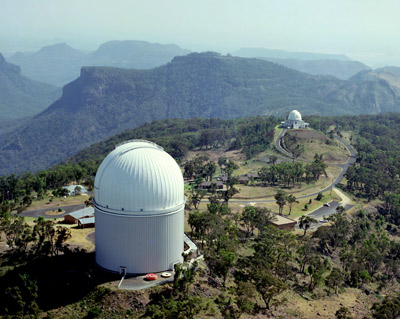 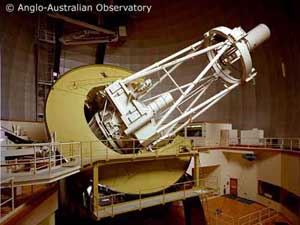 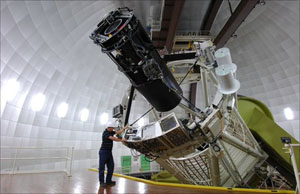 Top of the the Anglo-Australian Telescope.

The Anglo-Australian Observatory (AAO) is an observatory that operates the Anglo-Australian Telescope and 1.2-m (48-in) United Kingdom Schmidt Telescope on Siding Spring Mountain (at an altitude of 1,150 m), near Coonabarabran, New South Wales, Australia. Nearby, on the same site, are (or were before a fire in 2003) instruments of the Mount Stromlo and Siding Spring Observatories.

The headquarters and laboratory of the AAO are on the same campus as the Australia Telescope National Facility in the Sydney suburb of Epping.

The AAT came into operation in 1974 and, among many others tasks, is used, in conjunction with a high-resolution échelle spectrometer, to carry out the Anglo-Australian Planet Search – an ongoing survey that began in 1998 to search for exoplanets around 240 relatively nearby stars in the southern hemisphere. The AAT was also used in the WiggleZ program, which ran from 2006 to 2011, and also employed NASA's GALEX space telescope to survey the distribution of about 200,000 galaxies out to distances of 8 billion light-years.

The United Kingdom Schmidt Telescope (UKST) is a 1.2-m Schmidt camera at the Anglo-Australian Observatory. It began operations in 1973. Its initial task was to construct a photographic survey of the entire southern sky. UKST is jointly owned by Britain and Australia.

OzDES – A survey to measure the redshifts of tens of thousands of galaxies and obtain spectra of supernovae and other transients. The galaxy redshifts will be used to make the most detailed measurement of the Universe's expansion history, leading to a better understanding of the physics behind the acceleration of the Universe.

GALAH – A spectroscopic survey of 1 million galactic stars to measure elemental abundances and measure stellar kinematics to understand the formation history of our Milky Way galaxy.

SAMI – A spatially-resolved spectroscopic survey of ~3000 galaxies, the largest ever to date, to explore the kinematics and internal astrophysical processes of galaxies to understand galaxy formation.