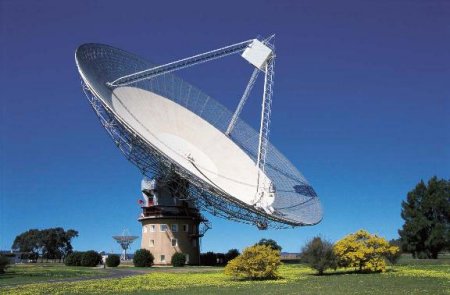 The Australia Telescope National Facility (ATNF) is an Australian radio astronomy facility opened in 1988. It is operated by CSIRO. ATNF consists of eight radio telescopes at three separate sites in New South Wales and is designed to use the aperture synthesis technique of mapping astronomical sources.

The Australia Telescope Compact Array (ATCA), located at the Paul Wild Observatory at Culgoora near Narrabri, consists of six antennas, each 22 m (72 ft) in diameter. Five can be moved along a common east-west track, 3 km (2 miles) long. The sixth is on its own track a further 3 km to the west.

Greater resolving power is achieved by linking one or more of the antennas in the Compact Array with a seventh 22-m dish, known as the Mopra Telescope, 100 km (60 miles) to the south near the Siding Spring optical observatory and the town of Coonabarabran, and the 64-m (210-ft) radio telescope at the Parkes Observatory, which has been in use 1961 and is a further 200 km (120 miles) to the south. Together, these antennas form the Long Baseline Array.

A notable feature of the Australia Telescope is the particularly large range of wavelengths at which it can observe. This facility makes it possible to map the emission from interstellar molecules of spectral lines in the radio region of the spectrum.

The Mopra Telescope is a 22-m radio antenna that forms part of the Australia Telescope National Facility. It is intended for use in conjunction with other ATNF antennas – the six 22-m dishes at Narrabri, and the 64-m dish at Parkes Observatory – to form the Long Baseline Array. Like the Parkes antenna, it is also used for single-dish operation; millimeter-wavelength receivers are to be installed in the future.

Parkes Observatory is the principal radio astronomy observatory of the southern hemisphere. Operated by the Australia Telescope National Facility and located 20 km north of Parkes, near Sydney, New South Wales, its main instrument is the Parkes Radio Telescope.

Parkes Radio Telescope is a fully-steerable 64-m (208-ft) dish-type instrument (Fig 2). The second largest of its kind in the southern hemisphere, it was completed in 1961. Since then it has been used almost continuously for astrophysical observations, tracking spacecraft, and SETI. It was the star of the film "The Dish" which dramatized its role in sending images of the first manned Moon landing to the rest of the world.

The design of the Parkes Telescope proved so successful that NASA used it as the basis for the 64-m dishes of the Deep Space Network located at Goldstone (California), Madrid, and Tidbinbilla (Australia). In 1987, the Tidbinbilla instrument was extended to 70 m making it the largest fully-steerable radio telescope south of the equator.