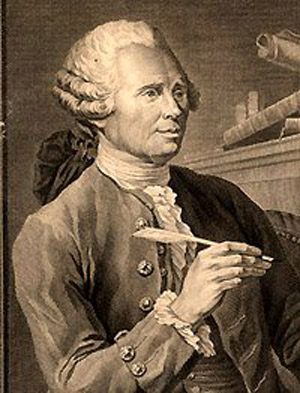 Jean Alembert was a French philosopher, physicist, and mathematician (named after the church of St. Jean le Rond upon whose steps he was found as a baby) who was a leading figure in the French Enlightenment. Together with his compatriots Joseph Lagrange, Pierre Laplace, Leonhard Euler, and Alexis Clairault, he applied calculus to celestial mechanics in order to tackle the three-body problem – the question of how three mutually-gravitating objects move. His efforts enabled him to explain mathematically (1754) Newton's discovery of the precession of the equinoxes, and also perturbations in the orbits of the planets. Shortly before his death, d'Alembert almost had a non-existent moon of Venus named after him by its "discoverer," the German astronomer and mathematician Johann Lambert, but declined the offer when his own calculations led him to doubt the object was real.

D'Alembert was persuaded by his friend Denis Diderot to contribute scientific articles to the monumental and influential Encyclopédie (1751). These articles generally argue in favor of the existence of exoplanets and life on other worlds but also point out some of the problems facing pluralism. On the question of other planetary systems, he employs a theological argument:

... it is very natural to think that each star ... has planets which make their revolutions around it ... for why would God have placed all the luminous bodies at such great distances from each other, without their being around them some opaque bodies which receive their light and heat?

Concerning the possibility of life elsewhere in the solar system, he takes a more scientific stance. In the entry "Monde", he notes several reasons to be cautious about unrestrained pluralism:

1. One doubts whether some planets, among others the moon, have an atmosphere, and on the supposition that they have not, one does not see how living beings can respire and subsist there.
2. Some planets as Jupiter present changing figures and aspects on their surface ... whereas it seems that an inhabited planet ought to be more tranquil.
3. Finally, comets are certainly planets ... and it is difficult ... to believe that comets may be inhabited ...

However, in "Planète," he marshals some astronomical claims, such as de la Hire's 1700 report of mountains on Venus, more sympathetic to the pluralists' cause:

Since Saturn, Jupiter and their satellites, Mars, Venus and Mercury are opaque bodies ... which are covered by mountains and surrounded by a changing atmosphere, it seems to follow that these planets have lakes, have seas ...; in a word, that they are bodies resembling ... the earth. Consequently, according to many philosophers, nothing prevents us from believing that the planets are inhabited.

D'Alambert pulled out of the project when the first volume of Encyclopédie was heavily criticized by the Church.