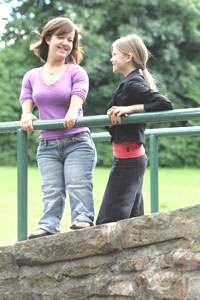 Achondroplasia is a condition in which, most notably, there are defects in the cartilage at the epiphyses of the long bones. Persons suffering from achondroplasia usually experience difficulties in locomotion and may have thick stunted limbs. It is the commonest cause of dwarfism.

Achondroplasia is one of a group of disorders called chondrodystrophies or osteochondrodysplasias. The condition may be inherited as an autosomal dominant trait, which means that if a child gets the defective gene from one parent, the child will have the disorder. If one parent has achondroplasia, the infant has a 50% chance of inheriting the disorder. If both parents have the condition, the infant's chances of being affected increase to 75%. However, most cases appear as spontaneous mutations. This means that two parents without achondroplasia may give birth to a baby with the condition.

The typical appearance of achondroplastic dwarfism can be seen at birth. Symptoms may include:

During pregnancy, a prenatal ultrasound scan may show excessive amniotic fluid surrounding the unborn infant. Examination of the infant after birth shows increased front-to-back head size. There may be signs of hydrocephalus ("water on the brain"). X-rays of the long bones can reveal achondroplasia in the newborn.

There is no specific treatment for achondroplasia. Related abnormalities, including spinal stenosis and spinal cord compression, should be treated when they cause problems.

People with achondroplasia seldom reach 5 feet in height. Intelligence is in the normal range. Infants who receive the abnormal gene from both parents do not often live beyond a few months.