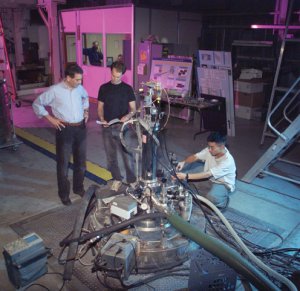 The axion is a hypothetical weakly-interacting boson with a tiny mass of between 10-6 eV (less than one ten-trillionth the mass of a proton) and 10-3 eV. Its existence, first proposed in the early 1970s, would explain why CP violation is not observed in interactions involving the strong force, although it should be according to simple versions of quantum chromodynamics (QCD). In other words, it would resolve what is known as the strong-CP problem in QCD. Axions would enable QCD to take account of the way the world of elementary particles distinguishes between left and right in some interactions, but not others. This is described in terms of axial symmetry, hence the name.

Axions would be able efficiently to transport energy out of stars or out of supernova cores. They have also become candidates to explain cold dark matter.

The two most sensitive ongoing experimental searches for axions rely on the so-called Primakov effect, i.e., the coupling of the axion to two photons, one of them virtual or man-made provided by a strong electric or magnetic field, and the second being the detectable signal. A high-Q resonant microwave cavity immersed in a strong superconducting magnet (a left over from a Strategic Defense Initiative project) is operated at Lawrence Livermore National Laboratory (LLNL), where it slowly scans microwave frequencies looking for axions in the narrow mass region over which they would constitute good galactic dark matter candidates. A second experiment, CAST, is being assembled at CERN. This will use a 10-meter, 20-ton decommissioned LHC (Large Hadron Collider) dipole magnet as a telescope to track the Sun looking for axions emitted from its core.

In a paper published in 2006,1 Piyare Jain and Gurmukh Singh, both of the State University of New York (SUNY), argue that axions may have been produced during an experiment at CERN in 1996. It took them years to analyze the data because rather than relying on automatic detectors to spot new particles, they used the older method of recording particle tracks on plates of photographic emulsion and then painstakingly examining each plate under a microscope. This method has the advantage that it can reveal short-lived processes that automatic detectors might miss. Jain and Singh claim to have identified more than 350 tracks made by axions.