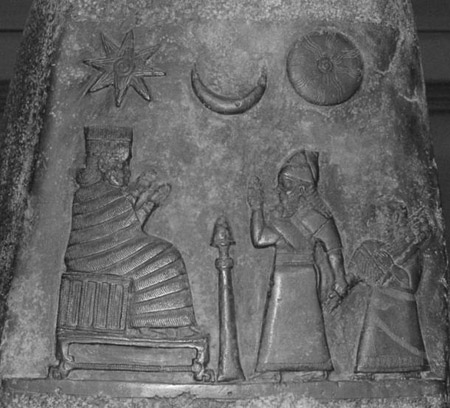 In this Babylonian tablet King Melishipak I (1186–1172 BC) presents his daughter to the goddess Nannaya. The crescent moon represents the god Sin, the Sun the Shamash and the star the goddess Ishtar.

Babylonian astronomy goes back at least as far as 1,800 BC and centers mainly on the problem of establishing an accurate calendar, so that the emphasis was on recording and calculating the motions of the Sun and Moon. Early on, observation played an important role, but this gave way later to analyzing records of ancient observations, which in turn led to the mathematical prediction of current and future astronomical events. The continuity of civilization in this part of the world enabled records to be kept over a long enough period for features such as the precession of the equinoxes and the regularity of eclipses to be recognized. The Babylonians also divided the sky into zones, the most important being that which lay along the ecliptic, the apparent path followed by the Sun, Moon, and planets across the backdrop of the sky. The Latin names of the signs of the zodiac as we know them today are translations of the old Babylonian constellations.

In connection with the planets, the Babylonians appear to have been motivated by religious-philosophical reasons to take note only of isolated events, such as a planet's first and last appearances in the sky. Such occurrences were taken to have astrological significance: they might foretell human fate. There is no evidence that the Babylonians, unlike the Greeks, came up with any geometrical model of the cosmos. Even so, at the height of its creativity, in the so-called Seleucid era, around 600 BC, Babylonian astronomy could predict planetary motions with surprising accuracy, thanks to careful observations and the fact that from ancient times the Babylonians had a powerful mathematical tool in the sexagesimal system of numbers – a place-value system based on 60 that we still use. Babylon became part of the Persian empire, and its glory dimmed for a while. However, after Alexander conquered the Persian empire, Babylon's culture and science had a significant influence on the Greeks.

En Henduanna is the earliest female known to have had a connection with astronomy. She was the daughter of Sargon of Akkad who established the Sargonian Dynasty in Babylon. He appointed her the chief priestess of the moon goddess of the city – a position of great power and prestige. Only through the auspices of the high priestess could a leader achieve a legitimate claim to rule. Of her written work, translations of 48 of her poems survive. To put her in perspective, astronomy began with the priests and priestesses in Sumeria and Babylon. As early as 3000 BC, these sacred temples in Sumer were complex structures that directed every essential activity of life including trade, farming, and crafts. The priests and priestesses established a network of observatories to monitor the movements of the stars. The calendar they created is still used to date certain religious events like Easter and Passover.