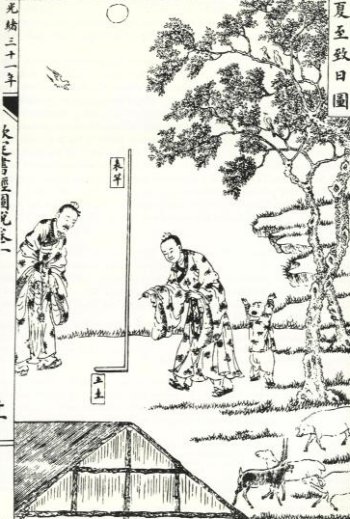 Astronomical ideas played an important part in the culture of China. An Anyang bone inscription records a lunar eclipse "on the fifteenth day of the twelfth moon of the twenty-ninth year of King Wu-Ting (November 23, 1311 BC)." In 1137 BC, the Shang Emperor Ti-hsin is recorded as ordering a sacrifice because the predicted lunar eclipse fell on the wrong day. By 700 BC the Chinese observed the shadows of the Sun from special towers, which remained in continuous use for determining calendars for 1,500 years. By 350 BC the length of the solar year was known to be 365¼ days, based on the helical rising of Spica. Cosmological ideas were interwoven with the Chinese world concept, which embodied the knowledge of the celestial sphere with its daily rotation around a pole. The horizon played a role, but the planets were not considered important, although their motions were noticed.


Chinese lunar calendar and importance of the pole

The Chinese perceived Heaven to be round. It had nine levels; each of which was separated by a gate and guarded by a particular animal. The highest level, the Palace of Purple Tenuity, was where the Emperor of Heaven lived in the constellation we call Ursa Major. At the center of Heaven was the North Pole and the polar star.

The celestial pole was a critical characteristic of Chinese cosmology. To the Chinese, the center was the most important geographical point because it was the closest to Heaven. They believed that the heart of civilization lay at the center of the earth, and as the land spread out, the lands and its inhabitants became more savage. Naturally, this emphasis on the center point lead to the polar axis as a pivotal aspect of Chinese astronomy.

While the Greeks focused on the constellations on the horizon and created a solar calendar, the Chinese observed the circumpolar stars, which lead them to devise a lunar calendar instead. The polar axis which ran from the polar star, south to Earth was the pivot of the heavens. The heavenly vault slid up and down this axis while the earth itself oscillated along it to create the seasons. The stars around the pole were also an integral part of Chinese cosmology. The circumpolar stars were the key constellations to the lunar mansions of the hsiu. At the equator, the Chinese divided the sky arbitrarily into twenty-eight divisions, each corresponding to a equatorial and a circumpolar constellation. Based on which mansion the moon occupied at night, the Chinese created their lunar calendar.