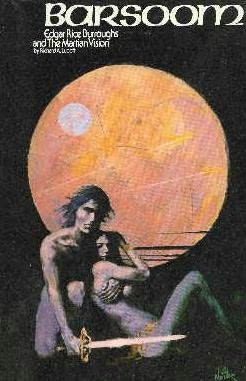 The cover of Richard Lupoff's book about Edgar Rice Burroughs and his Mars stories.

Barsoom is the name by which Mars is known by its natives in the science fiction novels of Edgar Rice Burroughs. In 1912 Burroughs published a story entitled "Under the Moons of Mars" (printed in book form in 1917 as A Princess of Mars) in which he referred to the "hurtling moons of Barsoom" (i.e. Phobos and Deimos). Over the course of ten novels, written between 1912 and 1943, Burroughs fleshed out his fictional vision of Barsoom with locations on the planet and various characters and species. At the heart of his descriptions is the idea, promulgated by the French astronomer Camille Flammarion (whom Burroughs acknowledges as a source for his inspiration) and others, that Mars was a dying world, much further along in its evolution than Earth. Burroughs also adopts the notion, popular among some at the time, that the Red Planet was criss-crossed by a system of canals, intelligently constructed, to carry meltwater from the poles to the arid desert regions.

One of the chapters in Carl Sagan's book Cosmic Connection: An Extraterrestrial Perspective is called "The Hurtling Moons of Barsoom".