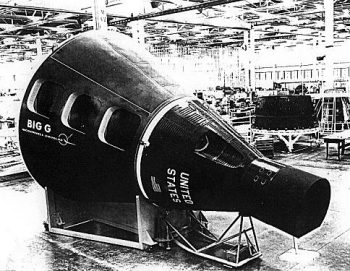 Big Gemini was a 1967 proposal by McDonnell Douglas to the United States Air Force and NASA for a manned orbital logistics spacecraft to provide economical resupply of planned military and civilian space stations.

By the end of 1966 the Gemini program was nearing an end and the design phase of the Air Force's Manned Orbiting Laboratory (MOL) project was almost complete. McDonnell Douglas had a large manned spacecraft engineering team, built up over eight years on the Mercury, Gemini, and MOL programs, which was facing dissolution. At the same time, both the Air Force and NASA had funded space station projects. The Air Force's MOL and NASA's Apollo Applications Program Orbital Workshop (later Skylab) were supposed to fly in 1969–74, and both the Air Force and NASA were planning even larger follow-on stations-the LORL and MORL, respectively. The capability of existing spacecraft (the Apollo Command Module and Gemini) for such missions was severely limited. In 1970–80, it appeared that at least a dozen launches would be needed for logistics purposes for the Apollo Applications Program (AAP) alone. MOL and the AAP Workshop would demand 3–6 flights a year, each delivering a crew of two or three, with 1–7 tons of cargo being sent up, and up to 0.6 cubic meter of cargo being returned. Planned late 1970s stations would have crews of 6–24, requiring a resupply craft that could deliver up to 12 passengers and 12 tons of payload 6–14 times a year, returning up to 7 cubic meters of cargo each time.

Big Gemini was intended to provide such a capability by 1971, using Gemini technology applied to Gemini and Apollo hardware. However, even at the time the concept was born, both NASA and Air Force manned space projects were being cut back. Within 18 mo, MOL would be cancelled and AAP would be limited to using only spacecraft and boosters surplus to the Moon landing program. Soon after, the Space Shuttle became the only funded space project for the 1970s and all space station work was abandoned.