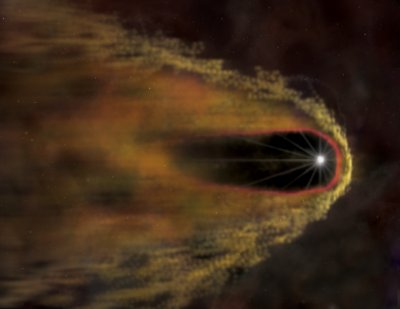 Artist's impression of the optical and X-ray emission surrounding the Black Widow pulsar B1957+20. Credit: NASA/CXC/M.Weiss. 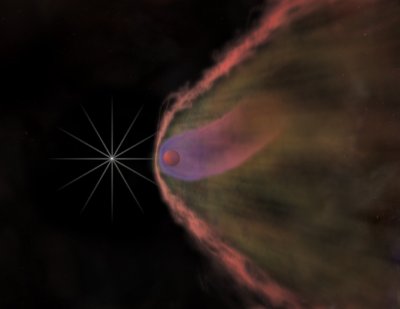 Close-up of the Black Widow pulsar and its companion.
Credit: NASA/CXC/M.Weiss.

Black Widow Pulsar (B1957+20) is a binary pulsar, discovered in 1988, in which a pulsar, with a pulse period of 1.6 milliseconds, is in an eclipsing orbit with a normal stellar companion. The signal from the pulsar is delayed, causing the period to lengthen, a few minutes before eclipse and for about 20 min after the pulsar reappears. This delay arises because the signal must travel through the ionized plasma surrounding the companion.

It is thought that most of the companion's material lies well beyond its Roche lobe, and that this outer material is being blown off the companion by the neutron star. Calculations suggest that the Black Widow will evaporate away its companion in about one billion years.

The rapidly spinning pulsar, marked by the white star in the top illustration, is moving from left to right generating a bow shock (a sonic boom traveling ahead of the pulsar into surrounding interstellar gas.) When hydrogen atoms in this surrounding gas are overrun by the bow shock, they are hit by rapidly moving protons and electrons behind the shock. This causes them to emit H-alpha light, seen by optical telescopes and corresponding to the yellow rim extending in a curved arc around the pulsar.

Inside the bow shock, the pulsar generates a wind of high-energy particles and antiparticles, which move outwards in all directions at close to the speed of light (marked by the white rays extending out from the pulsar). This particle wind carves out an oval-shaped cavity around the pulsar, stretched out along the direction of motion. At some distance from the pulsar, this wind must suddenly slow down to match the speed of surrounding gas. This slow-down process creates synchrotron radiation, detectable in X-rays and denoted in this figure by the red "skin" of emission which encloses the cavity hollowed out by the pulsar. In three dimensions this skin forms a cylinder enclosing the tube-like cavity, and produces the tail-like appearance of the X-rays seen in the actual data.


Effect on the companion star

On a scale about a million times smaller than the top illustration, the pulsar's high-energy wind also has a dramatic effect on its companion star, which orbits the pulsar every 9.2 hr. The pulsar is shown as a white dot, with its wind flowing out at high speeds in all directions.

On these scales this wind is generally unimpeded, except in the directions in which it flows towards the companion star. The companion star produces its own wind, but a much weaker and slower version. The two winds collide not far above the companion star's surface, the resulting collision generating more X-rays, marked by the curved red arc in this figure. The pulsar's powerful wind and the resulting X-rays are blasting the companion, stripping it of gas and steadily evaporating it, as can be seen by the purple trail of material streaming away from the companion star. Eventually, this effect might completely destroy the companion, which is why this pulsar is known as the Black Widow.

The companion star is orbiting clockwise, causing the trail behind it to curve around in the beginnings of a spiral pattern.