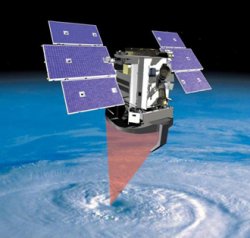 CloudSat is part of a multisatellite experiment designed to measure the vertical structure of clouds from space. CloudSat carries a millimeter-wave radar capable of seeing practically all clouds and precipitation, from very thin cirrus clouds to thunderstorms producing heavy precipitation. It flies in tight formation with CALIPSO, which was launched with it and will provide high-resolution vertical profiles of aerosols and clouds. CloudSat and CALIPSO, in turn, follow behind Aqua in a looser formation.

CloudSat was launched on April 28, 2006, from Vandenberg Air Force Base. It is a partnership between Colorado State University, JPL, the Canadian Space Agency, the United States Air Force, and the United States Department of Energy, and is a mission in NASA's ESSP (Earth System Sciences Pathfinder) program.