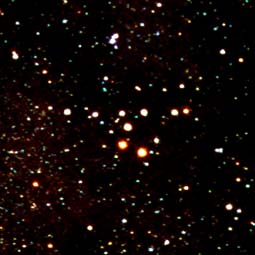 The Coathanger (Collinder 399) is an open cluster of about 40 stars in the constellation Vulpecula. Six of its brighter stars, of sixth and seventh magnitude, are lined up in a nearly perfect row, from the center of which four stars form a hook to complete the coathanger shape. The cluster was first described by Al-Sufi in AD 964 and rediscovered independently by Giovanni Hodierna. It was included in Per Collinder's 1931 catalogue of open clusters and is also known as Brocchi's Cluster after the American amateur astronomer D. F. Brocchi who created a map of it in the 1920s for calibrating photometers. In the 1980s the Coathanger was found to share roughly the same motion with about 10 other clusters, including the Pleiades, NGC 6633, 6709, 6882, and 6885, and IC 4665. The Coathanger is best viewed through binoculars; to the naked eye, it appears as an unresolved patch at the border of Vulpecula and Sagitta.