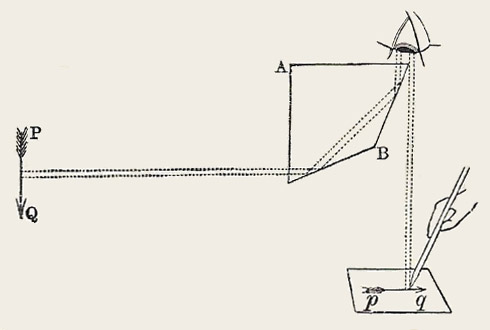 The camera lucida and camera obscura are simple optical devices which assist artists in drawing faithful reproductions of distant scenes, plans, and diagrams, or microscopic specimens.

The principle of the camera obscura (literally "dark chamber") was known to Aristotle and was described by Giambattista della Porta in his Magic Naturalis (1569). In its simplest form it consists of a rectangular box with a small hole in one wall. Light is admitted through a small hole into the dark interior chamber and a real image of the scene outside is projected on the opposite wall. Later versions used a lens and a mirror to give an evenly-illuminated horizontal image. A lens whose focal length is equal to the length and depth of the box projects an image onto the opposite wall where there is a plane mirror placed at an angle of 45°. The mirror throws the image of any objects to which the lens may be directed on a piece of ground-glass on the top of the box in a non-inverted position, so that they may be viewed or sketched from as in nature. The instrument received a new interest when in the hands of Daguerre it became the 'main instrument used in photography.

The camera lucida is an optical instrument that has been constructed in various forms and for various purposes. Robert Hooke invented an earlier form of it in 1674. The one invented by William Wollaston in 1807 employs a four sided prism to allow the artist to see a virtual image of an object in the plane of the paper on which the image is to be copied. It used to be of particular use in enlarging or reducing artwork and in drawing from the microscope.

In the Wollaston instrument (Fig 1), a small small quadrilateral glass prism of which AB in the figure is the perpendicular section, is held in a brass frame, which is attached to an upright rod, having at its lower end a screw-clamp, to fix it to the edge of a table. The prism being at the height of about a foot from the table, has its upper face horizontal. Two of its faces, as in the figure, are at a right angle at A; the contiguous faces make respectively with them angles of 67½°; so that the remaining obtuse angle at B contains 135°.

An eye, as in the figure, then receives the emergent pencil through one part of the pupil, so that an image, pq, of the object is seen projected upon a sheet of paper upon the table. The rays from the drawing-pencil passing the edge of the prism, enter the other part of the pupil; and the pencil and image being seen together upon the paper, a sketch of the latter can be taken. There is, however, a practical difficulty -- the image and the drawing-pencil are at different distances from the eye, and so cannot be seen together distinctly at the same time. To obviate this, a plate of metal, with a small aperture as an eye-hole, is placed at the edge under the eye, so that the rays through the prism, and those from the drawing-pencil, which both pass through the eye-hole, form only very small pencils. By this the difficulty is greatly diminished. It is still, however, difficult to use the instrument satisfactorily; and though many acquire great readiness in its use, others have never been able to attain the same facility. A simpler form is merely a piece of smooth glass fixed at an angle of 45° to the horizon. In this case, however, the image seen on the paper below will be inverted. In Arnici's form of the instrument a right-angled triangular prism is used, involving two refractions and one reflection.