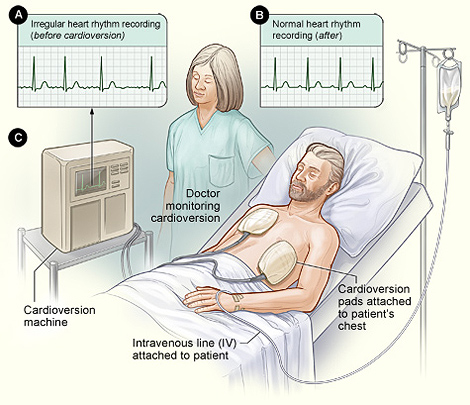 Typical setup for a nonemergency cardioversion.

Cardioversion is a procedure used to restore a fast or irregular heartbeat, called an arrhythmia, to a normal rhythm. Arrhythmias can prevent the heart from pumping enough blood to the body. They also can raise the risk for stroke, heart attack, or sudden cardiac arrest.

As it travels, the signal causes the heart to contract and pump blood. The process repeats with each new heartbeat.

A problem with any part of this process can cause an arrhythmia. During an arrhythmia, the heart can beat too fast, too slow, or with an irregular rhythm. Cardioversion is used to correct fast or irregular heartbeats.

For the electrical procedure, low-energy shocks are given to the heart to trigger a normal rhythm. The patient is temporarily put to sleep before the shocks are given. This type of cardioversion is done in a hospital as an outpatient procedure. This means the patient can go home after the procedure is done.

This article only discusses the electrical procedure.

Many doctors prefer to do electrical cardioversions because they work better and are more predictable. It's also easier to find out right away if the procedure worked.

Cardioversion isn't the same as defibrillation, although they both involve shocking the heart. Defibrillation gives high-energy shocks to the heart to treat very irregular and severe arrhythmias. Defibrillation is used to restore normal heartbeats during life-threatening situations, such as cardiac arrest.

Cardioversion successfully restores normal heart rhythms in more than 75 percent of people who have the procedure. However, fast or irregular heartbeats can occur again. For this reason, a person may need to have more than one cardioversion over time.

The procedure has some risks. For example, it may worsen arrhythmias. However, serious complications are rare.

No food or drinks should be taken for about 12 hours before the cardioversion (or as a doctor advises).

To find out whether anticlotting medicine is need, a transesophageal echocardiogram (TEE) may be carried out before the cardioversion. A TEE is a special type of ultrasound, a test that uses sound waves to look at the organs and structures in the body.

A medicine is administered so that the subject sleeps during the TEE. A special wand that transmits sound waves is put on the end of a tube. The tube is passed down the throat into the esophagus (the passage from the mouth to the stomach). The tube is placed close to the heart, and the sound waves create pictures of the heart. These pictures will be examined to see whether any blood clots are present.

The TEE will be scheduled for the same time as the cardioversion or just before the procedure. If blood clots are found, the cardioversion may be delayed for a few weeks. During this time, the subject will take anticoagulant.

Even if no blood clots are found, anticoagulant will be administered through a vein during the cardioversion. Medicine will also be taken after the procedure to prevent blood clots.

Before a cardioversion, the patient is put under general anesthesia. This anesthetic can affect the patient's awareness upon waking up, so that he or she must arrange to be driven home after the procedure.

A nurse or technician sticks electrodes (in the form of soft patches) on the patient's chest and possibly on the back. Some shaving may be needed to get the patches to stick to the skin. The electrodes are attached to a cardioversion machine, which records the heart's electrical activity. The machine also sends low-energy shocks through the electrodes to restore a normal heart rhythm.

A nurse uses a needle to insert an intravenous (IV) line into a vein in the patient's arm. Through this line, the doctor or nurse administers a general anesthetic. While the patient is asleep, a cardiologist (heart specialist) gives one or more low-energy electrical shocks to the heart. Heart rhythm and blood pressure are closely watched during the procedure for any signs of complications.

Cardioversion takes just a few minutes. However, the patient will likely be in the hospital for a few hours due to the prep time and monitoring after the procedure.

The patient is closely watched for an hour or so after the procedure for any signs of complications, before being released from hospital by a doctor or nurse.

Patients may feel drowsy for several hours after the cardioversion because of the medicine used to make them sleep. They should not drive or operate heavy machinery the day of the procedure, and will need to arrange for someone to drive them home from the hospital. Until the medicine wears off, it also may affect awareness and ability to make decisions.

A person may have some redness or soreness on the chest where the electrodes were placed. This may last for a few days after the procedure. There may also be slight bruising or soreness at the site where the intravenous (IV) line was inserted.

Medicine is taken for for several weeks to months after the procedure to prevent blood clots. During this time, medicine may also be taken to prevent repeat arrhythmias.

Cardioversion can sometimes worsen arrhythmias. Rarely, it can cause life-threatening arrhythmias. These irregular heartbeats will occur within minutes of the procedure. They're treated right away with electrical shocks or medicines, so they usually don't cause serious problems.

Rarely, cardioversion can cause stroke or other complications due to blood clots in the heart traveling to other organs or tissues. The risk of this happening is less than 5 percent anticlotting drugs are taken before and after the procedure.