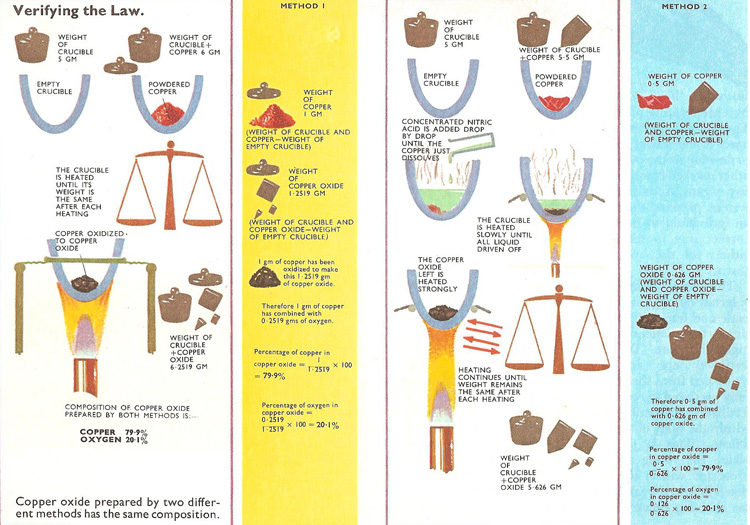 There is no definite formula for the composition of a mixture. If you want to mix one spoonful of sugar with your tea, you can; if you want to mix two, you. A pinch of sulfur can be mixed a pound of iron filings or a pound of sulfur can be mixed with a pinch of iron filings. It is possible to prepare mixtures of complete ranges of compositions. But this is certainly not true of compounds. For example, iron sulfide, the compound of iron and sulfur, always contains 56 grams of iron for every 32 grams of sulfur. By weight, iron sulfide is 36.4% sulfur and 63.6% iron. Provided the composition is pure, its composition will always be the same.

The full statement of the law of constant composition is: All pure samples of the same chemical compound contain the same elements chemically combined in the same proportions by weight. This is quite independent of the way the compound has been made. Pure water always has the same composition by weight, irrespective of whether it has been synthesized from its elements by burning hydrogen in oxygen or it is water of crystallization released from some crystals of hydrated copper sulfate by strongly heating them. Even the water vapor in the breath, a product of respiration (the burning of food in the body to produce energy) has the same composition.

The law can be verified by making two samples of copper oxide, each made by a different method and then working out the composition of each sample (see illustration). In both cases metallic copper is the starting point. It can be converted directly to the oxide by strongly heating in air or dissolved in concentrated nitric acid to convert it to the nitrate. Strongly heating the nitrate decomposes it, driving off oxygen and oxides of nitrogen. The oxide of copper is left behind. The composition of both samples of copper oxide can be calculated and proved to be the same. Its composition is constant and does not depend on the method manufacture.

The law of constant composition played a part in, and was placed on a firm theoretical basis by, the atomic theory put forward by John Dalton.