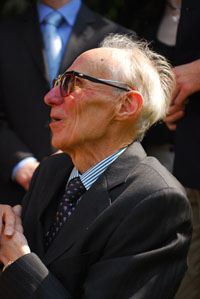 Audouin Dollfus was a French astronomer who, in 1966, discovered what was, at the time, the innermost known moon of Saturn, Janus. Before the first planetary probes, Dollfus sought evidence for tenuous atmospheres around Mercury and the Moon, and made the first ascent in a stratospheric balloon in France in order to carry out detailed studies of Mars. Before the Viking landings, he correctly concluded, from polarization experiments with hundreds of different terrestrial minerals and polarization observations of the Red Planet, that the martian deserts are strewn with iron oxide (Fe203). From 1946, he worked at the Meudon Observatory outside Paris.