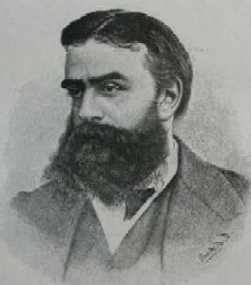 Giovanni Donati was an Italian astronomer who carried out early spectroscopic studies of the Sun and stars and was the first to obtain and analyze the spectrum of a comet, concluding that comets are, at least in part, gaseous. Between 1854 and 1864 he discovered six new comets, the brightest of which, found in 1858, became known as Donati's comet. His spectroscopic observations of the 1864 comet contained three prominent lines which Donati named alpha, beta, and gamma. These same lines were seen in an 1866 comet by Angelo Secchi, and shown by William Huggins in 1868 to be due to the presence of carbon.

After graduating from the university in his native city of Pisa, Donati joined the staff of the Florence Observatory in 1852 and was appointed director in 1864. He died from bubonic plague. 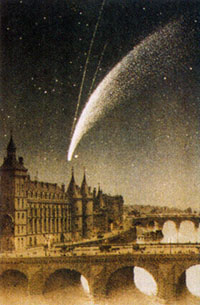 Donati's comet (C/1858 L1) was one of the brightest and most visible comets of the 19th century; it was discovered by Giovanni Donati on June 2, 1858, brightened to magnitude -1 in September 1858, reached perihelion on Sep 30, came closest to Earth (0.5 AU) on October 9, and was last seen on March 4, 1859. Around the time of closest approach the Earth, the comet developed a prominent dust tail, up to 60° long and curved like a scimitar, for which it is best remembered.