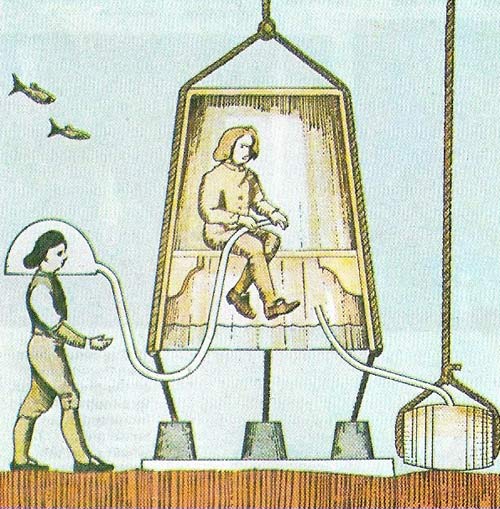 Fig 1. Edmond Halley's diving bell was 2.4 m (8 ft) high and 1.5 m (6 ft) wide at the base. It was wooden with glass portholes and was weighted with lead. Air was supplied from one of two lead-lined barrels. When the first barrel was exhausted it was pulled back to the surface to be refilled. 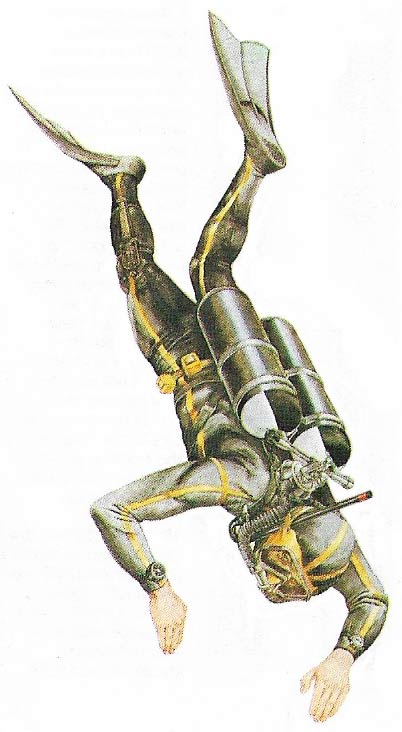 Fig 2. The aqualung (or SCUBA) diver wears a rubber suit. Compressed air carried in tanks is delivered at ambient water pressure (equal to that of the surrounding water) via a demand valve. 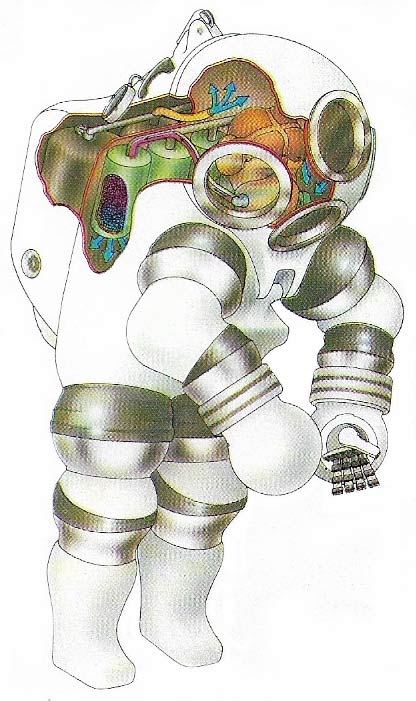 Fig 3. This atmospheric diving suit, dubbed "Jim" by its inventors, has a working depth of 300 m (1,000 ft). The articulated arms and legs permit only limited movement; tools are gripped by manipulators. The diver works at surface rather than ambient pressure, which avoids decompression. Soda lime scrubbers remove exhaled carbon dioxide, and oxygen is replenished from two cylinders in the backpack.

Fig 4. A submerged decompression chamber can be used to treat an injured diver or one who is suffering from the bends. He can be admitted to the main chamber through an air lock from a portable pressure vessel (left), which has its own bottled air supply. The rate of decompression to ordinary pressure can then be carefully controlled. 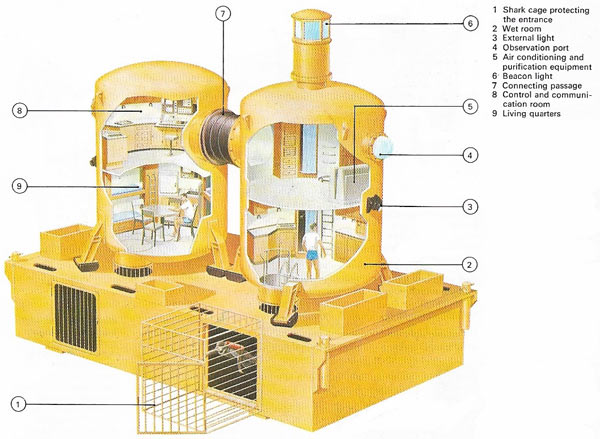 Fig 5. Tektite was designed to study the reactions of scientists working for long periods under saturated diving conditions. It has four chambers and accommodates four or five people. 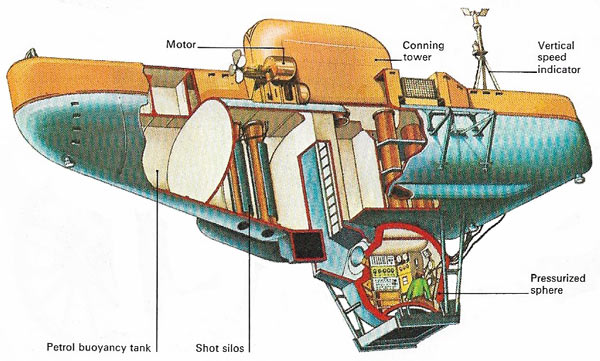 Fig 6. The bathyscaphe FRNS 3 consists of a pressure sphere fitted with an entrance hatch and a conical Plexiglas window. Entry is through an airlock. The buoyancy tanks are in compartments built of light sheet metal and filled with gasoline for buoyancy. To descend, the remaining tanks and airlock are flooded. Electric motors provide lateral movement at depth and lead shot ballast is jettisoned for ascent.

Deep-sea diving is the descent by divers to the seabed, usually for protracted periods, for purposes such as exploration and salvage. As early as the fourth century BC Alexander the Great (356–323 BC) was lowered into the sea in a large glass barrel and he used divers in military operations such as the siege of Tyre (334 BC).The Romans had primitive diving suits connected by an air pipe to the surface. This principle was also known in the early sixteenth century.

A diving bell is a hollow structure providing a dry environment for underwater workers. The earliest reliable diving bells, which were open at the base and supplied with air by a hose from the surface, date from the sixteenth century. In 1663–1664. One such bell was used to recover 53 cannons from the Swedish galleon Vasa.

The first practical bell holding more than one diver was built by Edmond Halley (1656–1742) (Fig 1) in 1690, and bells are still used for harbor construction and salvage.

In 1715, John Lethbridge devised an early diving suit: that looked much like a barrel with sleeves and a viewport, but was useless for depths of more than a few meters. In 1802 William Fowler devised a suit in which air was pumped to the diver by bellows. And in 1837 (improving his earlier design of 1819) Augustus Siebe (1788–1872) invented the forerunner of the modern diving suit – a continuous airtight suit to which air is supplied by a pump. The diving suit today has a metal or fiberglass helmet with viewports and inhalation and exhalation valves, joined by an airtight seal to a metal chestpiece, itself joined to a flexible watertight covering of rubber and canvas; and weights, especially weighted boots, for stability and to prevent the diver shooting toward the surface. Air or, more often, an oxygen/helium mixture is conveyed to the diver via a thick rubber tube. In addition, he has either a telephone wire, or simply a cord which he can tug, for communication with the surface. Such suits are still used extensively in underwater engineering down to 60 m (200 ft) but it is the aqualung (Fig 2), developed by Jacques Yves Cousteau and Emile Gagnan in 1943, that gives the diver greatest mobility.

Nowadays SCUBA (self-contained underwater breathing apparatus) diving, where the diver has no suit but carries gas cylinders and an aqualung, is preferred in most cases since it permits greater mobility. In all diving great care must be taken to avoid the bends, or aeroembolism, caused by ascending too rapidly to the surface.


The physiology of diving

The air supplied to divers, whether from a pump or from aqualung tanks, must be at the same pressure as the surrounding water so that the diver's body is not crushed. At a depth of less than 10 m (33 ft) water pressure equals that of the atmosphere (1.03 kg/sq cm, 14.7 lb/sq in); each 10 m from the surface increases pressure by one atmosphere.

The result of breathing air at higher than normal pressure is that nitrogen (which forms 80 percent of air) becomes highly concentrated in the blood and tissue fluids. This dissolved nitrogen can turn back into a gas in the organs and bloodstream if pressure is lowered too suddenly, leading to decompression sickness, usually called "the bends". If a diver rises from below 14 m (45 ft) too quickly, the nitrogen in his blood is not expelled in the normal way through his lungs; and the bubbles formed in his system prevent the proper circulation of his blood.

To avoid the bends, divers are raised in stages, stopping for a set period at predetermined depths as they ascend. If for any reason this has not been possible, divers can be put into a decompression chamber (Fig 4). This subjects them to the same pressure at which they were working underwater and then slowly returns them to normal atmospheric pressure.

At depths greater than 40m (130 ft) dissolved nitrogen can produce narcosis, a state in which a diver becomes so confused or euphoric that he may even remove his air supply. Narcosis can be avoided by using a mixture of oxygen and helium, but the mixture alters the diver's voice, making his speech almost unintelligible, and causes him to lose body heat rapidly — a hazard in cold waters unless he wears a heated suit. The deepest dive made at sea to date using SCUBA gear was 133 m (437 ft), accomplished in 1968. Much deeper dives have been simulated in compression chambers: in 1970 two Royal Navy divers went to an equivalent of 457 m (1,500 ft) for ten hours. The "dive" and subsequent decompression took 15 days to complete.

The disadvantages of the need for decompression after each dive can be overcome by saturation diving techniques. Twenty-four hours' exposure to nitrogen-free artificial air (such as a mixture of oxygen and helium) under pressure causes a diver to become "saturated" at that pressure. He can remain under pressure for several weeks, greatly increasing his working capacity, after which only one decompression is necessary. Divers working under saturation conditions live in a large deck decompression chamber; they then transfer under pressure into a smaller chamber from which they work. On their return the transfer is reversed. Underwater habitats such as Conshelf, Tektite (Fig 5) and Sealab, are variations on the saturation diving system. The living chamber lies on the seabed and divers enter and leave through an entry trunk. These habitats are used mainly for scientific research in depths down to 100 m (328 ft).


Submersibles for industry and research

Cornelius van Drebble built one of the earliest submersibles in 1620. Powered by 12 oarsmen, it travelled 5 m (16 ft) below the surface of the Thames. Subsequent development of small submarines was largely directed towards military objectives. Only in the 1960s was much attention paid to the development of submersibles for scientific research or underwater engineering.

Since 1960 more than many submersibles have been built with depth ranges from 100 m to 2,000 m (329–6,560ft) and displacements of between five and 100 tons. The present generation of working submersibles, used in biological and geological research, are mostly in the 10–20 ton range and carry a pilot and one or two observers who enter the submersible on the mother ship. The interior is at atmospheric pressure throughout the dive. Since 1973 submersibles have been used increasingly by the offshore oil and natural gas industry for pipeline inspection, repairs and platform site surveys. The serious quest to probe great depths began in 1930 when Otis Barton and William Beebe descended to 425m (1,400ft) off Bermuda in a steel pressure sphere, or bathysphere, lowered on a cable from a ship. On 23 January 1960 Jacques Piccard and Donald Walsh descended 10,917 m (35,820 ft) to the bottom of the Challenger Deep in the Mariana Trench. The bathysphere, which made its first dive in 1930, was spherical, made of steel, and could withstand considerable pressures, but it was restricted to depths within reach of supply and winch cables. It has been replaced by the bathyscaphe.