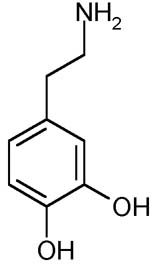 Dopamine is one of the catecholamine neurotransmitters in the brain. Dopamine activates five types of dopamine receptor – D1, D2, D3, D4 and D5 – and their variants. It is produced in several areas of the brain, including the substantia nigra. Dopamine is derived from tyrosine and is the precursor to adrenaline (epinephrine) and noradrenaline (norepinephrine).

Dopamine is also a neurohormone released by the hypothalamus. Its main function as a hormone is to inhibit the release of prolactin from the anterior lobe of the pituitary gland.

Dopamine can be supplied as a medication that acts on the sympathetic nervous system, producing effects such as increased heart rate and blood pressure. However, since dopamine cannot cross the blood-brain barrier, if given as a drug it does not directly affect the central nervous system. To increase the amount of dopamine in the brains of patients with diseases such as Parkinson's disease and dopa-responsive dystonia, L-dopa (levodopa), which is the precursor of dopamine, can be given because it can cross the blood-brain barrier.

Dopamine levels are influenced by the use of certain psychoactive drugs such as nicotine, cocaine, amphetamines, and ecstasy.