(A) Diagram of a brain capillary in cross section and reconstructed views, showing endothelial tight junctions and the investment of the capillary by astrocytic end feet. (B) Electron micrograph of boxed area in (A), showing the appearance of tight junctions between neighboring endothelial cells (arrows). (A after Goldstein, Goldstein and Betz, 1986; B from Peters et al., 1991.) 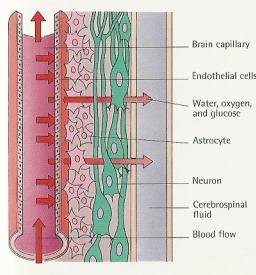 Diagram of the blood-brain barrier transverse to a capillary.

The blood-brain barrier (BBB) is a mechanism that controls the passage of substances from the blood into the cerobrospinal fluid and thus into the brain and spinal cord. It lets essential metabolites, such as oxygen and glucose, pass from the blood to the brain and central nervous system (CNS) but blocks most molecules that are more massive than about 500 daltons. This is a low mass in biomolecular terms and means that everything from hormones and neurotransmitters to viruses and bacteria are refused access to the brain by the BBB. It also means that many drugs, which would otherwise be capable of treating disorders of the CNS, are denied access to the very regions where they would be affective.

Key functions of the BBB are:

The special properties of the blood-brain barrier were first observed in the late 19th century by the German bacteriologist Paul Ehrlich. He found that when he injected colored dyes into the blood stream they leaked out of capillaries in most regions of the body to stain the surrounding tissues; the brain, however, remained unstained. Ehrlich wrongly surmised that the brain had a low affinity for the dyes. It was his student, Edwin Goldman, who did the other half of the experiment and realized the truth of what was going on. Goldman injected a dye into the cerebrospinal fluid that surrounds the brain and observed that it stained the brain, but nothing else. Goldmann correctly concluded that the dye was unable to cross the specialized walls of brain capillaries.

A key aspect of the blood-brain barrier are the thin, flat cells known as endothelial cells which form the walls of capillaries. In most parts of the body, the endothelial cells in the capillaries overlap at what are called junctions. These junctions are leaky enough to let a lot of different materials move through the wall of the blood vessel into the tissue and back again. These materials include normally beneficial stuff such as hormones and nutrient molecules as well as potentially harmful agents like toxins, viruses, and bacteria. Substances can get into the surrounding tissues either by leaking out of the junctions or passing straight through the endothelial cells.

However, in the brain there's a different arrangement where the endothelial cells join up. The endothelial cells meet each other at what are called tight junctions. These junctions block the passage of most things except for small molecules and are a crucial component of the blood-brain barrier.

In order to traverse the walls of brain capillaries, substances must move through the endothelial cell membranes. Because the main constituent of cell membranes are lipids, it would seem that a molecule could only can get into the brain if it were lipid-soluble. However, many ions and small molecules that aren't readily soluble in lipids do move quite readily from brain capillaries into brain tissue. A molecule like glucose, the primary source of metabolic energy for neurons and glial cells, is an obvious example. The explanation for this apparent paradox is the presence of specific transporters for glucose and other critical molecules and ions.

In addition to tight junctions, the "end feet" of astrocytes (the terminal regions of astrocytic processes) surround the outside of capillary endothelial cells. The reason for this endothelial-glial allegiance is unclear, but may have reflect an influence of astrocytes on the formation and maintenance of the blood-brain barrier.

Factors that can lower the blood-brain barrier

Various factors and conditions can lead to a lowering of the BBB. These include: