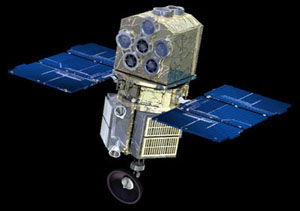 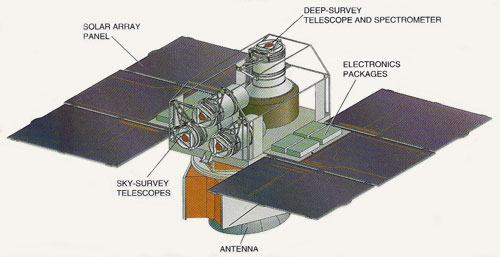 The spacecraft is shown here stripped of its outer insulating covering. Three sky-survey telescopes look out perpendicular to the axis of rotation of the satellite. The axis lies in the plane of the ecliptic – that in which Earth circles the Sun – and points toward and away from the Sun. As the satellite rotates, the sky-survey telescopes scan the sky perpendicular to the spin axis; in six months the entire sky is mapped. The fourth deep survey telescope looks along the rotation axis and scans a small strip of sky in the direction away from the Sun. This portion of the sky is observed for substantially longer exposure times, revealing fainter sources of EUV radiation.

Extreme Ultraviolet Explorer (EUVE) was a NASA mission to study the universe as it appears in short-wavelength ultraviolet (UV) light. EUVE carried out an all-sky survey in the 7–76 nanometers (nm) portion of the spectrum and a "deep survey" of a strip of the sky along the ecliptic with extremely high sensitivity. It performed follow-up spectroscopic observations on bright extreme ultraviolet (EUV) point sources. Its results have been used to study stellar evolution and local stellar populations, energy transport in stellar atmospheres, and the ionization and opacity of the interstellar medium. At the end of the all-sky survey in January 1993, a Guest Observer program was started. EUVE was controlled from the Center for EUV Astrophysics at the University of California, Berkeley, and designed for on-orbit servicing by the Shuttle. Its main instruments were three grazing-incidence UV telescopes covering 8–90 nm and one EUV spectrometer.