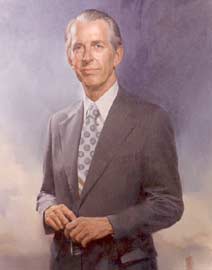 James Fletcher was a NASA Administrator who oversaw or initiated many of the major American space projects of the 1970s and 1980s during two spells in office: 1971–76 and 1986–88. He was in charge at the time of the three Skylab missions in 1973–74 and the Viking landings on Mars in 1976. He also approved the Voyager probes to the outer planets, the Hubble Space Telescope program, and the Apollo-Soyuz Test Project. Most significantly, he won approval from the Nixon Administration on January 5, 1972, to develop the Space Shuttle as the Agency's next endeavor in human spaceflight. During his second spell as Administrator, Fletcher was largely involved in efforts to recover from the Challenger disaster, ensuring that NASA reinvested heavily in the Shuttle program's safety and reliability, and making organizational changes to improve efficiency. A critical decision resulting from the accident and its aftermath was to expand greatly the use of expendable launch vehicles. Fletcher received a BS in physics from Columbia University and a PhD in physics from the California Institute of Technology. After holding research and teaching positions at Harvard and Princeton Universities, he joined Hughes Aircraft in 1948 and later worked at the Guided Missile Division of the Ramo-Wooldridge Corporation. In 1958 he cofounded the Space Electronics Corporation in Glendale, California, and was later named systems vice president of the Aerojet General Corporation. In 1964 he became president of the University of Utah, a position he held until he was named NASA Administrator in 1971. Upon leaving NASA for the first time in 1977, Fletcher served on the faculty of the University of Pittsburgh and as an advisor to key national leaders involved in planning space policy.